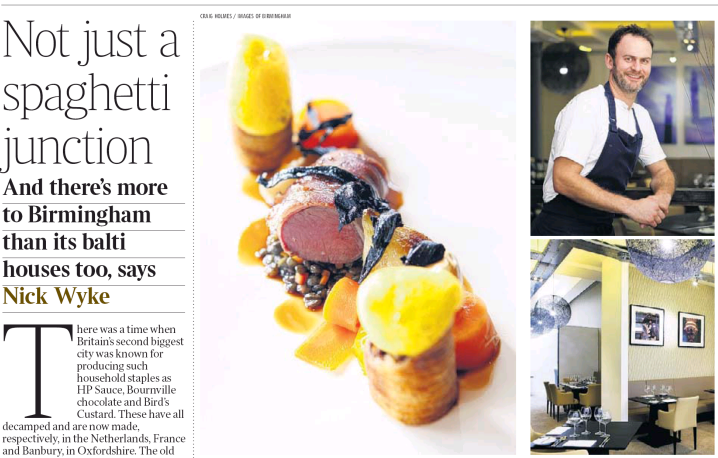 By now most of the newspapers have picked up on the New York Times’ choice of Birmingham as a “place to visit in 2012”. Generally stories plough the same tired furrow. After covering off the obligatory line of ‘Birmingham!? Really? Yeah, I know I bet you thought it was a shit-hole.‘ will go on to point out the regenerated Bull Ring and Selfridges, mention our three Michelin-starred restaurants, and perhaps the Balti Triangle (it’s got loads of curry restaurants!). Maybe a mention of the canals, of defunct industry and if you are lucky a little dig at the accent too. And Cup-a-Soup. And Tizer.

To many, this is all old news at this point.

So I was very happy to get the opportunity this week to speak to Nick Wyke from the Times and give him my (opinionated) view of the cities food offerings and perhaps help represent a more interesting view of Birmingham’s offerings.

And I was absolutely delighted yesterday when I read his piece that that he’d managed to get so many of my suggestions into the piece. Of course he mentioned the great Turners, Simpsons and Purnells but he also covered:

I also re-iterated my thoughts that Birmingham has great high-end options and decent cheap eats (mainly Indian and Chinese) but very little in the middle bracket, with the exception of the awesome Carters of Moseley.

So now we have risen above the cliches, I am hoping this article (and this blog) will show the city council that there are other options than reflexively granting permission for new Nando’s, Pizza Express or Cafe Rouge when they sit down to plan.

In the long run, as demonstrated by the interest from the New York Times, this could do a great deal for Birmingham’s tourism industry as well as our own enjoyment of the city.

3 thoughts on “The World Wakes up to Birmingham’s Food”