Spag bol has enjoyed a recent renaissance in the smoke&umami household due to Hannah’s current insatiable appetite for meat .. which she claims is a result of breast-feeding. But we can’t eat steak for every meal, even though she’d like to, so spag bol is making a regular appearance in our weekly roster.

In recent times I’d all but stopped making spaghetti bolognaise. Partly because Hannah claimed it gave her heartburn. But shamefully, I think it might be because it got a bit naff. What with all these purists like Carluccio telling us it doesn’t even exist in Italy. I guess everyone knows now it’s *correctly* a meat ragu, shouldn’t have tomatoes in it, and should be served with flat noodles – never spaghetti.

GET OUT! I’m sick of Italian food purists, especially as you can’t ever be right in Italy anyway, with disputes over recipes carried out with fierce localism. Two villages 5km apart will happily wage a bloody vendetta over whether it’s permitted to put a splosh of cream in a carbonara sauce (er, probably).

But, to be fair, I did find that I was getting bored with my usual, “traditional” recipe which was essentially onions, red wine, mince and tomatoes.

I’ve made it much more ragu-y by dialling down the tomatoes and adding beef stock.

But the thing that really makes this dish sexy again is the liberal addition of chicken livers, which gives it a proper grown-up taste that kids presumably would hate.

The other thing that’s rekindled my love of this dish is being able to make it in my pressure cooker (just like people did in the 70s/80s!). This means you can get it done in under an hour from start to finish and the results are as good, if not better than slow cooking.

And of course, this dish when done properly can serve up a huge whack of umami. Meat is a good source of umami, as are tomatoes and of course the obligatory parmesan on top. But there are plenty of ways to boost umami further; I use Worcestershire sauce (bet they don’t use that in Emilia-Romagna) and tomato paste. Some use fish sauce. A judicious splurt of umami paste wouldn’t necessarily be a bad call. And the Waitrose beef stock that’s branded Heston has konbu in it as well. No wonder it tastes so good!

And, to be fair to the Italians – serving this with a thick ribbon pasta like papardelle or tagliatelle is probably more appropriate than spaghetti. Don’t forget to add a a good knob of butter at the end.

The brave Felicity Cloake tackled spag blog on her “Perfection” series on the Guardian website – I don’t really agree with her conclusions, but it’s worth a read!

I reckon most readers of this blog have got their own recipe for spaghetti bolognaise. Here’s mine.

The way I do this is to sweat off the onions, carrots, celery and garlic – as I chop them – in that order – in the pressure cooker with a little vegetable oil. When softened, remove from the pan and into a bowl. Next, fry off the mince in stages over a very high heat, trying to get as much colour on the mince as possible. Remove from pan. Deglaze the pan with the red wine and reduce by half. Then add all the cooked ingredients and the rest of the ingredients to the pressure cooker, cover, bring to high pressure and cook for 30 minutes. If the sauce is too runny, strain the liquid into a smaller pan and boil rapidly until the sauce reaches the desired consistency, and add back to the meat. Pick out the bay leaves and thyme if you are posh.

As with all such things this is better the next day, and even better the day after. This will make enough for at least 10 servings, so I like to freeze what I don’t use. 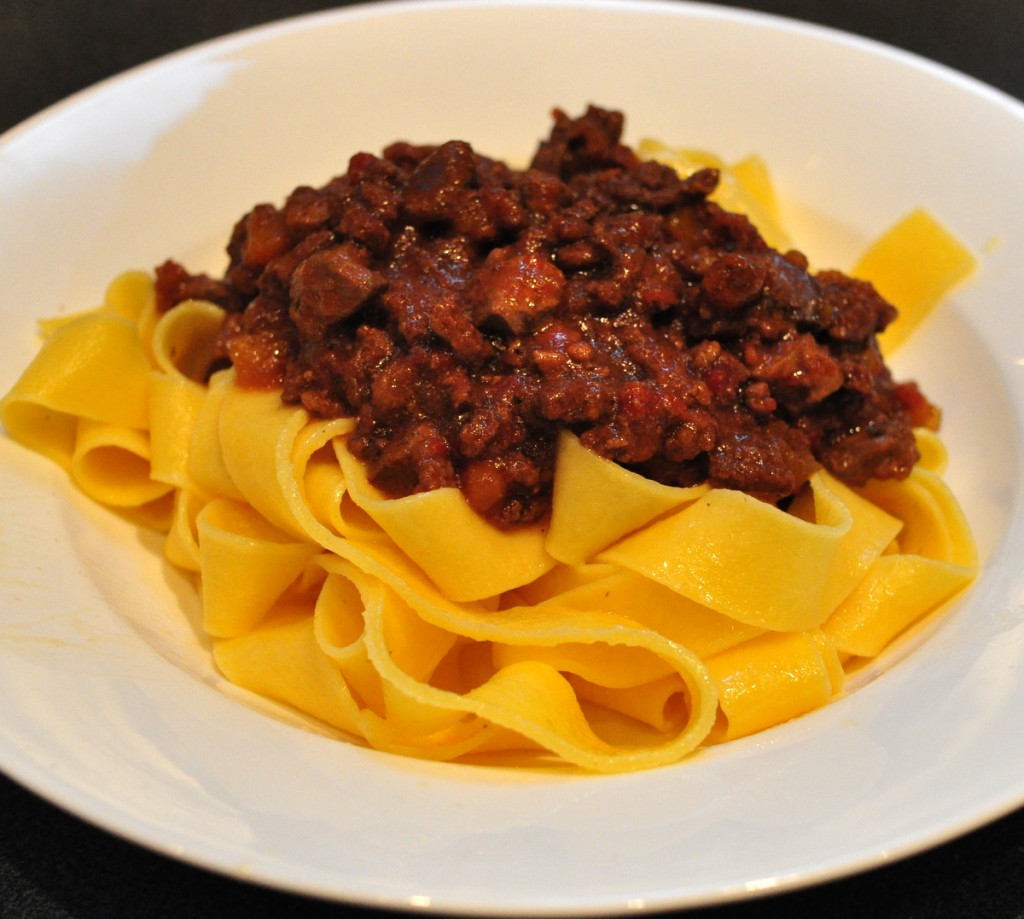 3 thoughts on “The smoke&umami guide to spaghetti bolognaise”