Brisket, it could drive a man to the brink of madness. A fickle mistress – some days she will offer herself up willingly, others you must plead for hours and be rewarded only with gristle.

What I’m saying is: cooking BBQ brisket is tricky. I think that’s probably why BBQers like it. It takes a bit of skill, a lot of experience, and some luck.

Now unlike most Internet posts on the subject of BBQ I will not pretend to have all the answers on how to do proper Southern Texan BBQ. After all I am based in a quiet, residential area of Birmingham (West Midlands, not AL).

But I do feel through bitter experience I now know a few things which I will relate to you now!

Assuming – like me, your ideal brisket will have a lovely pink smoke ring, an appetising crust and a moist interior, I have one major tip for you.

Get the right brisket.

This is rule one. You cannot make a silk purse out of a sow’s ear, and you can’t make great brisket with crap meat.

Other than the usual rules (not from ASDA) you are looking for something specific. Fat.

This gives most living in the UK an instant headache – getting well marbled beef is tricky. You genuinely won’t find it in the supermarket. Even most butchers will struggle.

Even your super-expensive butcher – identified by tens of badly parked 4x4s outside – may not do it.

My solution is to buy some of Ifor’s Welsh Wagyu, supplied by Alternative Meats (that sounds like an advert, it isn’t!) which is down the road in Shropshire. This isn’t the same as Kobe beef – that distinction is reserved for Wagyu cattle raised in certain Japanese prefectures, meeting certain standards. But like the Japanese stuff, it is hella marbled.

I had a fun time trying to explain the exact cut of brisket I wanted with Rachel over the phone early this week. And what she sent me on Wednesday was absolutely amazing, a 7kg monster which looked very well aged and had a great covering of fat.

OK. That’s my tip over. I’ll blog the recipe in stages, as I do them.

First stage is, paradoxically, to trim a little of that surface fat off and trim out the thick ribbon of fat. Fat is very good but I need my dry rub to get somewhere near the meat surface. I’ll save the fat to make some dripping for roast potatoes.

Next step: the dry rub

It actually seemed a bit of a shame to rub such a lovely bit of meat, but I tried to be restrained. It’s not really Southern BBQ without an intensely flavoured crust.

My improvised dry rub consists of paprika, salt, pepper, brown sugar, celery salt, garlic powder, some dried oregano from the garden and some ground mulato peppers (as that’s what I had in the cupboard).

After rubbing, it gets wrapped in clingfilm to sit in the fridge overnight.

After a night in the fridge, I take it out and let the brisket come to room temperature. This takes quite a few hours because it’s so big.

I decided to smoke with a mixture of mesquite, apple and maple. I find that mesquite – although the definitive Southern flavour – can be overpowering used on its own. The maple adds a sweetness that I think goes very well with beef and the apple has a kind of floral quality.

Into the smoker and I try to monitor the temperature (with an oven thermometer, not the Bradley built-in thermometer which is rather inaccurate due to its location). I’ll try and keep it around 220-250F.

Rotate the brisket rack once in between cooking.

I waited until about 11:30pm and took the brisket out. Into an foil tray, add some apple juice and tightly cover with multiple layers of foil. Into the domestic oven at 93 degrees C / 200 degrees F overnight.

The next morning I wake to the rich aroma of smoked meat. Downstairs in my dressing gown to check it – a fork or skewer should go through the thickest part with little to no resistance. It’s perfect!

Let it cool a little and then wrap the brisket tightly in several layers of foil, then a tea towel and then into an insulated cool box (I had a polystyrene container that the brisket originally shipped in).

It will still be warm when you come to eat it – in our case about 6 hours later. 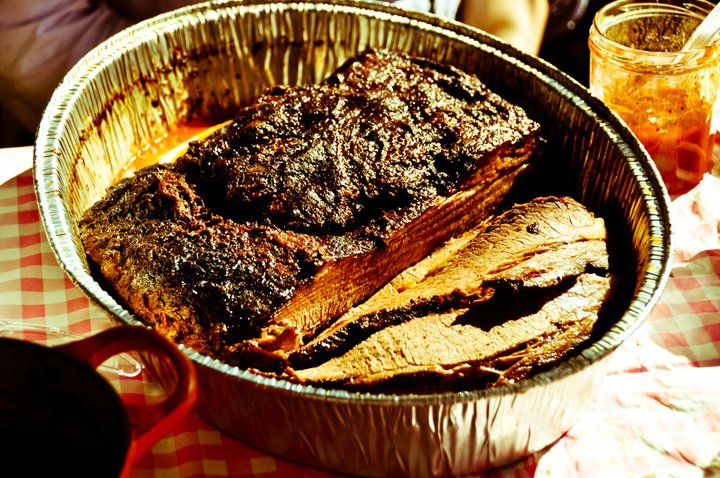