Hannah said she wanted crab linguine, but she wanted a creamy version, not oily. Most web recipes for crab linguine are for the tried and tested olive oil, garlic, chili, lemon and parsley combo and there’s certainly nothing wrong with that. But there aren’t so many creamy versions, so I decided to make my own up.

As with all crab recipes it’s best when made with freshly cooked crab. But this recipe can be knocked up much more with the pasteurised crab meat you can find in the supermarket, which seems more practical for an after-work dinner. I like the “Seafood and Eat It” range as they do a half-and-half white and brown pack. The taste is fine. Lap introduced me to the idea of serving the brown crab meat as a loose pate, enriched with clarified butter, served on toast (sourdough would be good) alongside the pasta, and it’s a jolly good idea. And of course you should be generous with the crab meat which should be present in goodly amounts clinging to each strand, not searched for hopefully at the bottom of the plate.

Another recent pasta revelation is that I much prefer the Giuseppe Cocco linguine to de Cecco (too thick) or Waitrose’s own brand stuff, it’s narrower and so more sauce can adhere to the pasta, yet still keeps its texture.

Clarify the butter or – even better – if you have Morecombe Bay shrimps already in butter use that. Cook the shallot in about half the clarified butter until soft in a decent sized pan which will take the pasta later.

To make the brown crab pate:

Put half the softened shallot, the rest of the clarified butter and the brown crab meat in another saucepan and combine over a low heat. Season with salt, pepper and lemon juice to taste. Set aside. Add a drop of Pernod if you like.

To make the crab linguine:

Cook your pasta until al dente. While doing this add the white wine to the pan and cook until reduce by at least half. Add the fish stock and reduce by half. Add the white crab meat and brown shrimps and stir and remove from heat. Add the drained pasta and stir well. Add half the chopped parseley. Season to taste with salt (important!), pepper and lemon juice. Finish by stirring in the cream, still off the heat. Plate up and add the rest of the parsley.

Serve the brown crab pate on a piece of toast with the crab linguine.

Variation: garlic instead of onion in the pasta 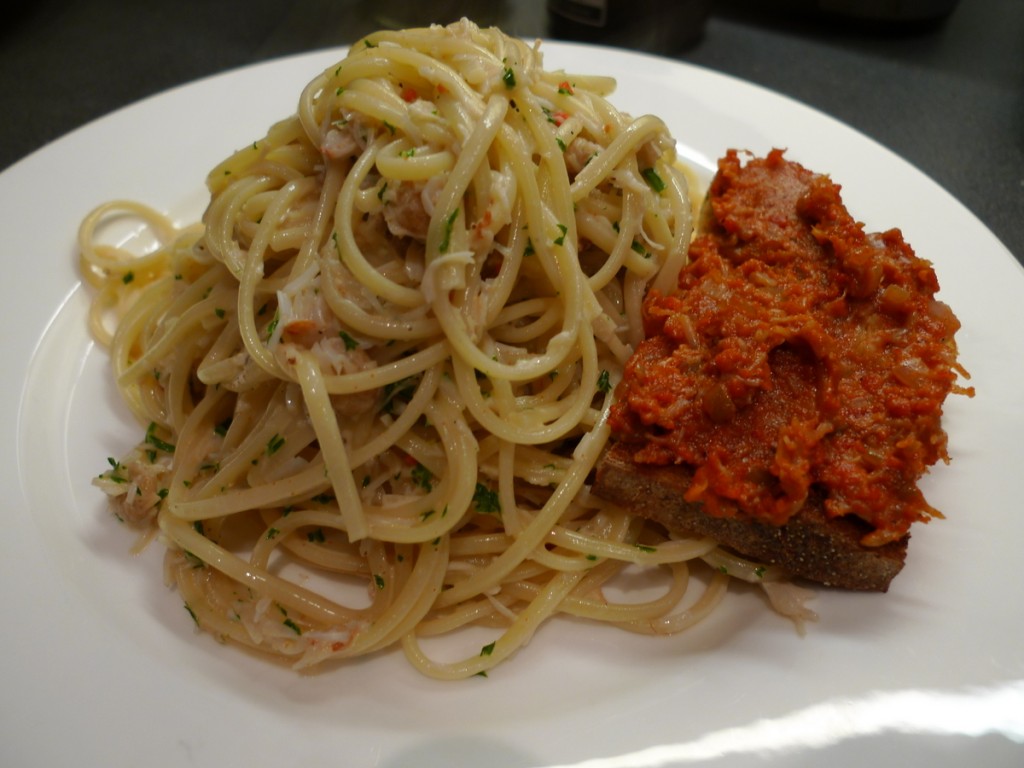