Who knew that the dining scene in Reykjavik was so brilliant? Certainly not me, I went to Iceland hoping to see the Aurora Borealis and incredible geological wonders. It turned out to be a bonus four day gastronomic adventure of exciting dishes in some fantastic restaurants too.

The holiday was booked months ago by the wife and duly put on the back burner by me, I’d not researched any of the dining options until a few days before the start of the holiday. I really wasn’t expecting a long list of options but the more I looked into it the more it dawned on me that Reykjavik was bursting with great restaurants with some tasty looking websites. So I hurriedly made bookings at a handful of restaurants: Fish Company, Fish Market, Grill Market, Seafood Grill – notice the theme running through here? What’s more the city’s top restaurants were participating in the annual Food & Fun festival. For the week we were there, guest chefs from around the world would be taking over the kitchen and celebrating the local produce by creating adventurous tasting menus.

The first night we had a Food & Fun tasting menu in Grill Market sheltering from the Arctic blizzard that had descended without warning. This is an ultra-cool spacious contempory dining space split between two levels. The open kitchen greets you as you enter at the ground floor with the flaming grill foremost. There’s a bar on this floor but we were lead to the lower level to the main dining area that exuded Nordic chic, warm wood merging with natural volcanic rock with industral metal flourishes. The menu started simply with potatoes boiled in seawater that was well matched with a smear of seaweed butter. Cabbage wrapped langoustine with mussels showed off the freshness of the main ingredients but the cabbage was oddly tough. A perfectly flame grilled slab of Arctic Char with roe, beetroot and cucumber continued to emphasis the quality of the local seafood. The meat course was a crusty chewy (in a good way) wood-fired beef ribeye, oxtail, potato skins and truffled gnocchi. This was a fantastically flavoured piece of meat, with a nice smoky flavour from the grill that is the heart the restaurant. A dessert of crunchy chocolate, caramel mousse and frozen skyr finished the meal in comforting fashion. The food menu was 6900Kr, around £35. It was the most expensive meal of the holiday so all those horror stories you’ve heard about the cost of eating in Iceland are completely untrue. 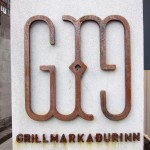 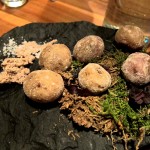 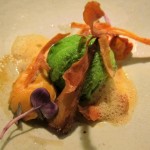 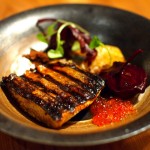 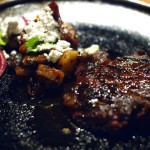 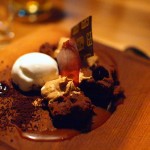 Cafe Loki serves up traditional Icelandic grub next to the main landmark in Reykjavik, Hallgrímskirkja; the monolithic futurist looking church. The only thing I knew of Icelandic cuisine before this holiday was the infamous putrified shark, Hákarl, which by all accounts reeks of old Victorian public toilets. Basking shark is inedible you see, the flesh is poisonous, but the locals over the centuries have found a way to make it at least safe to eat. They bury the sharks in the sand for six months, the rotting flesh is rendered non-toxic but of course is now utterly foul smelling. Hardcore TV chefs like Ramsay and Bourdain have wilted in the presence of this stuff. Cafe Loki serves up little cubes of the ‘delicacy’ as part of an Icelandic platter with arctic char, smoked lamb, mashed fish, dried cod and rye bread. It isn’t nearly as bad as it’s made to be, just merely like someone’s pissed on your Camembert. All our group of nine tried it, none of us gagged but then we are Chinese and pretty hardcore eaters! But seriously the other items were delicious, the best marinated herrings I’d ever eaten and a very moreish rye bread ice-cream which is a speciality of the cafe. 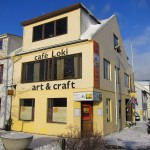 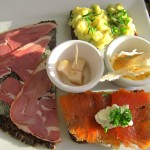 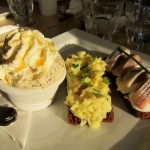 Icelandic Fish & Chips and The Sea Baron are both in the old harbour. They’re part of a small cluster of little eateries that includes sushi, tapas and a Haitian Cafe. Icelandic Fish & Chips is not a takeaway in the traditional British seaside way. It quite a spacious comfortable restaurant with very warm and friendly service. They serve various deep fried fish in their special recipe batter made from spelt and barley. The chips are actually sautéed potatoes and they have vast selection of skyr based dips. We tried Red Fish and Haddock, both were really fresh and the batter crispy and light. Best of all though we ordered a big bowl of garlicky langoustine to share between us. We had langoustine at almost every meal, they’re ubiquitous in Reykjavik and that is no bad thing at all. The langoustine trail continued at The Sea Baron which has the most famous lobster soup in the whole country. Deep fishy broth with a generous amount of lobster (langoustine) tails submerged within. The soup is delicious, a nice hint of curry in there, though the bread supplied to mop it up with was disappointingly pappy. The Sea Baron is shack-like and does grilled fish and even minke whale but we were too stuffed to try anything other than an oversized grilled lemon-sole, which was merely ok. 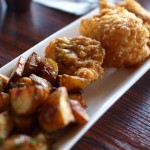 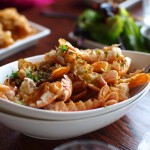 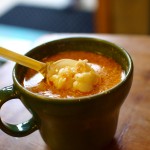 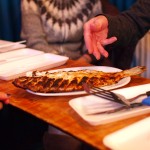 Fish Company is at the forefront of Icelandic cuisine, particularly championing the concept of Nordic Sushi. Which isn’t as preposterous as it first sounds because if you have fish as plentiful and fresh as you do in Iceland then applying Japanese concepts to eating it makes perfect sense. It helps too if your culture deeply respects fish and it really shows at Fish Company, another gorgeous restaurant in the heart of Reykjavik city centre. The restaurant was participating in the Food & Fun festival too but we had lunch when only the regular menu was available. The wife was smitten with the bread here in particular the combination of creamy skyr, butter and apple jam that accompanied it. We asked about the apple jam having never come across it before, we were told it was a speciality of the restaurant and couldn’t buy it but will see if the kitchen could spare us some. Apple jam was quickly forgotten about when the starters of fish soup with lobster tails, and minke whale arrived. The fish soup had little cubes of coconut jelly and seaweed, there was a Thai red curry flavour to it and all in all it’s probably the best fish soup I’ve ever tasted. The flavours were so deep, I can only imagine the amount of lobster tails that went into it. The dish of minke whale was very peculiar though, virtually raw there was a very strong livery flavour to the meat and a lingering mineral after-taste that was very interesting, like sucking on a freshly minted coin. The shredded cucumber helped to cleanse the palate a little but I couldn’t help thinking a good splash of something acidic would have done wonders. So to our mains of Nordic Sushi and Arctic Char, both wonderful dishes. The sushi was presented on a wide wooden platter overflowing with varied preparations of char, roe, maki rolls and the most savoury of marinated shark. The plated Arctic Char dish again featured langoustine and was highlighted with smoked apple. This is fine cooking and after our meal one of the chefs presented us with a little jar of apple jam to take home, we were delighted! 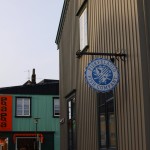 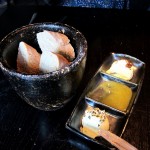 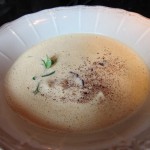 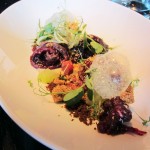 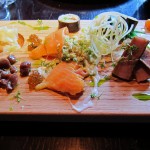 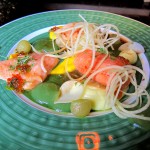 Just over the road from Fish Company is Tapas Barinn. It was displaying its Iceland Gourmet Fiest menu outside and we couldn’t resist the look of it. I mean how can you resist any 7 course menu that starts with smoked puffin and costs only 5890Kr? We shared one menu between two and it came with a shot of the local firewater Brennivin. It’s like aquavit and goes down very easily. Smoked puffin is a cross between duck and pigeon and went very well with the sharp and slightly sweet blueberry sauce. The rest of the menu was spot on too but especially the minke whale, which this time was served grilled in steak like fashion. It was delicious with no hint of peculiar after-taste. The restaurant is in the basement of one of the old buildings, the low ceilings suit the traditional tapas bar vibe. We got there quite early around 6pm and by the time we left around 9 it was packed with big groups of locals eating and being merry. 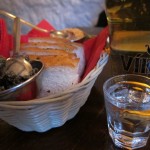 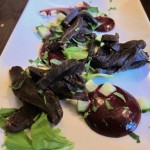 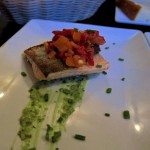 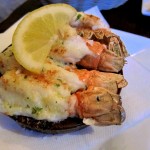 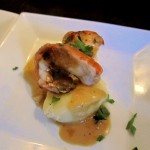 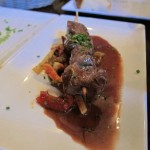 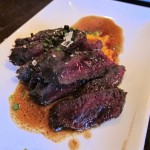 The restaurants in Reykjavik cater for large groups and certainly we found the service to be uniformly friendly, helpful and welcoming. In Grill Market we asked one of our servers whether the bill included a service charge, she said that all servers were well paid in Iceland so it’s up to you whether you wanted to leave genuine tip. We had to cancel some reservations in the end, regular holiday sightseeing stuff like Geysirs, Lagoons and Northern Lights got in the way of eating at Fish Market and the Seafood Grill. These will have to wait until we return along with Vox, Perlan, Lobster House and revisiting Grill Market and Fish Company of course. We’ll have to get a week off next time. 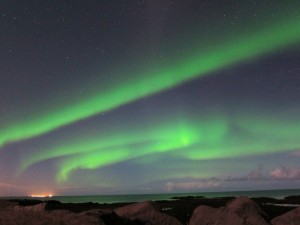 2 thoughts on “Dining in Reykjavik, Food and Fun”