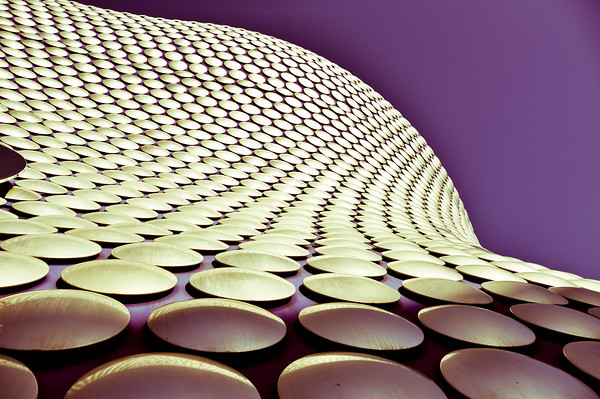 Photo by my wifelet Hannah

The few times we’ve been to the Selfridges restaurant – usually on a Sunday lunchtime – it’s been the same story. A half-empty restaurant. Glacially slow service. Warm Coke, with too little ice served from the always-disappointingly small 250ml bottle (that’s a mixer size in my view). Burgers are bought-in, evidenced by their regular shape and harsh onion flavour which you know will linger all afternoon. Chips are limp and too thick. Hannah’s tomato soup has the rasping acidity which comes from tedious and unripe glasshouse tomatoes. The chef doesn’t even the sense to roast them to give sweetness. Red mullet was, in the words of Alan Partridge, “burnt to a crisp – so it can only be identified from its dental records”. And the long, lingering “can we get the bill”, “now can we pay the bill” stalemate usually involves the walk of shame to the cash register. Like you don’t know the procedure for paying in a restaurant.

The food hall is no better. Yo Sushi! (!!) has turned into a grim vision of a future without fish. So infrequently now does anything containing fish pass along the conveyor belt you could give it 50 points in I-Spy. Your protein options are the ubiquitous tofu and chicken tonkatsu. The worst sushi in the world – the hideous Californian roll – waves past every 30 seconds. This hides a crab-flavoured stick (again, thanks Alan). When you do spot tuna it’s buried as a near invisible sliver, deep in a maki roll.

The Tiffinbites concession is worse still, a Pakistani friend still winces at the memory of eating their sad, reheated curries which have the lifeless colour of having sat around for a day or two and taste only of what Harold McGee would describe as “leftover flavours”. I remember the early Tiffinbites near Liverpool Street which served reasonably cheap, lively, vibrant curries. That’s not what you get here.

I’ve never tried the noodle counter which is always packed. But my friend Lap says that the laksa is “pretty good” but it’s the “only thing he’ll order there”.

Pret A Manger is a good option if you can fight your way over the mums wielding toddlers and prams like an offensive weapon.

The sad Selfridges diner concept which can’t decide if it’s American or not and is a similar story to the main restaurant. The burgers are sad and £5 too expensive.

The rest of the food hall is little better. They used to have a cheese counter with overpriced, poorly affineured cheese. That’s gone now. Fresh food options are virtually nil. They used to sell the estimable Walter Smith’s pork pies, albeit for a large premium over the same pie from Walter Smith in the indoor market. His pies are both great-tasting and locally made – so this couldn’t last and they swapped them out for the inferior *East* Midlands Mrs. King pie (they are OK but not a patch on Walter’s).

The biltong counter does an inexplicable trade.

There’s no fresh meat or fish or veg. London Selfridges has Jack O’Shea’s fine meat counter, with a range of aged beef that brings tears to the eyes. Here the best option for umami is marmite chocolate.

It’s sad that this icon of Birmingham, still the place we take visitors to first for its fabulous exterior has such poor eating options.