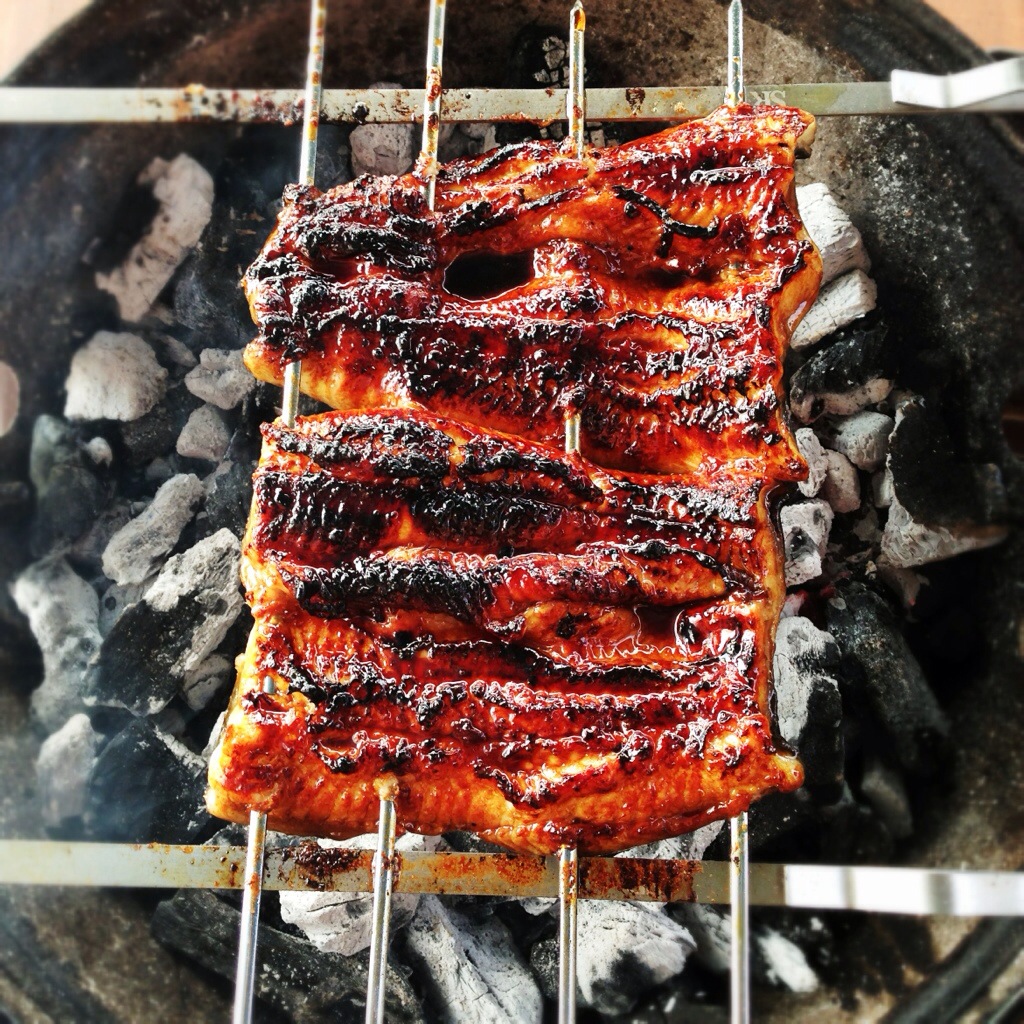 I’m a bit of a fan of eel, you might have read my thoughts on smoking one in an earlier blog. Love eating them but hate having to deal with them. But with anything sometimes you have to do the dirty stuff in order to get to the good stuff. The good stuff in this case being one of my favourite dishes. Simple grilled eel done the Japanese way with a sweet sticky soy based kabayaki sauce. “Oh yeah so what” you murmur “I can get frozen eel from Wing Yip “. Yes you can, it’s also the same kind of eel that’s on top of everyone’s favourite nigiri sushi. It tastes great but you really don’t know how great until you’ve tried the real thing fresh off the coals. Come on, think about that hot eel fat dripping down onto the hot charcoal, igniting, the vaporised lipids bonding with the kabayaki sauce as you lacquer it on. If you like Japanese food, then you owe it to yourself to try kabayaki unagi as soon as possible. It’s one of the most beloved dishes in Japan where specialist unagi restaurants exist to perfect it.

But now we come to the crunch! Where can you actually eat this dish? Certainly not in any Yo! Sushi or other high street Japanese restaurant. Even the high end places such as Tetsu, Shiori, Roka or Umu don’t do it. From my extensive research the closest is Nodaiwa in Paris, an offshoot of the Michelin starred one in Tokyo! You know I love this dish so much that I recently went to Paris and ate it there. But then I wouldn’t be much of a cook if I didn’t try to make it myself too. I mean how hard can it be? Well it’s not that hard at all except for one caveat. You have to fillet them and eels are the most difficult fish to fillet. But after that it’s all downhill! 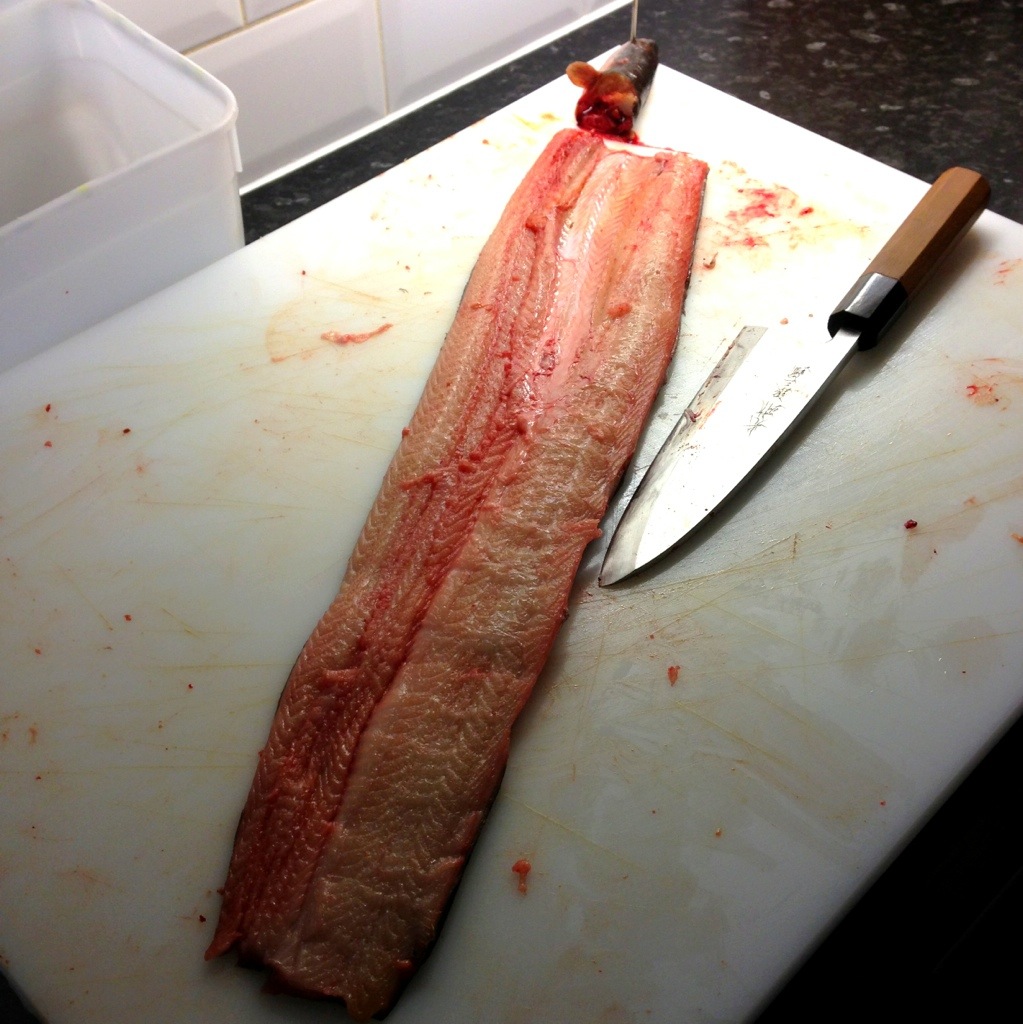 Dispatch your eel
I’m assuming of course that you’ve bought a live one because what would be the point of buying a dead one? Eels go off very quickly so cook them as soon as possible. My preferred method of dispatch is to lock one up in a pot with a slurry of salt. An hour should do it. Remove the eel and scrape all the slime off its leathery skin. Cut off the long fins that run along the top and bottom.

Fillet
This is the hard part. Because of the shape of them and the tough leathery skin they’re tricky to fillet conventionally. But when you come upon a fish conundrum you just have to ask yourself “what would the Japanese do?” as no doubt they’d have come up with a simple elegant solution. In this case the shape and tough skin has been turned into an advantage. Make a small drill hole in the top right-hand corner of your largest chopping board (if you’re right-handed) and peg the head securely to it with the belly facing away from you. Make an incision behind the side fin and zip your knife along the backbone to release the top fillet and open the eel out like a fishy baguette. Cut out the guts (hardcore unagi eaters skewer these and grill them separately). Snip the backbone near the head and cut out the bone in one long piece starting at the head. The tough skin will make sure the head is still firmly pegged to the board so you can give it some power if the bone is being stubborn. This is a lot easier with a traditional Japanese style single-bevelled deba knife, a useful investment if you eat a lot of fish or have a knife fetish.

Steam and Grill
Cut the fillet in half and thread the two halves onto thin metal skewers so that they are easier to grill. You can grill the eel from raw with just a little salt if you prefer but if you want to brush them with kabayaki sauce then it’s better to par-cook the eel first as the the sauce is likely to burn over prolonged grilling. Very gently steam the fillets for 7 to 8 minutes before gently grilling them directly over coals brushing with the sauce:

Kabayaki Sauce 4 parts light soy, 1 part mirin, 1 part sake, 2 parts white caster sugar by volume. This is the basic sauce, simmer until thickened. I like to add star anise and a whole clove of garlic too.

The grilling should not be rushed, take your time, brush as often as you like with the sauce. I like to do it six or seven times on the flesh side only as I like to make sure the skin is nice and crispy and plenty of the fat has rendered off. Give the flesh a final lacquering before cutting into bite sized pieces. That’s it, told you it was easy. Just serve over a mound of tender Japanese rice and lashings of the sauce drizzled over the top. Or if you’re a real Japanese food nerd, give it another grill over a tabletop Konro before you pop into your mouth. Truly one of the best mouthfuls of food there is. 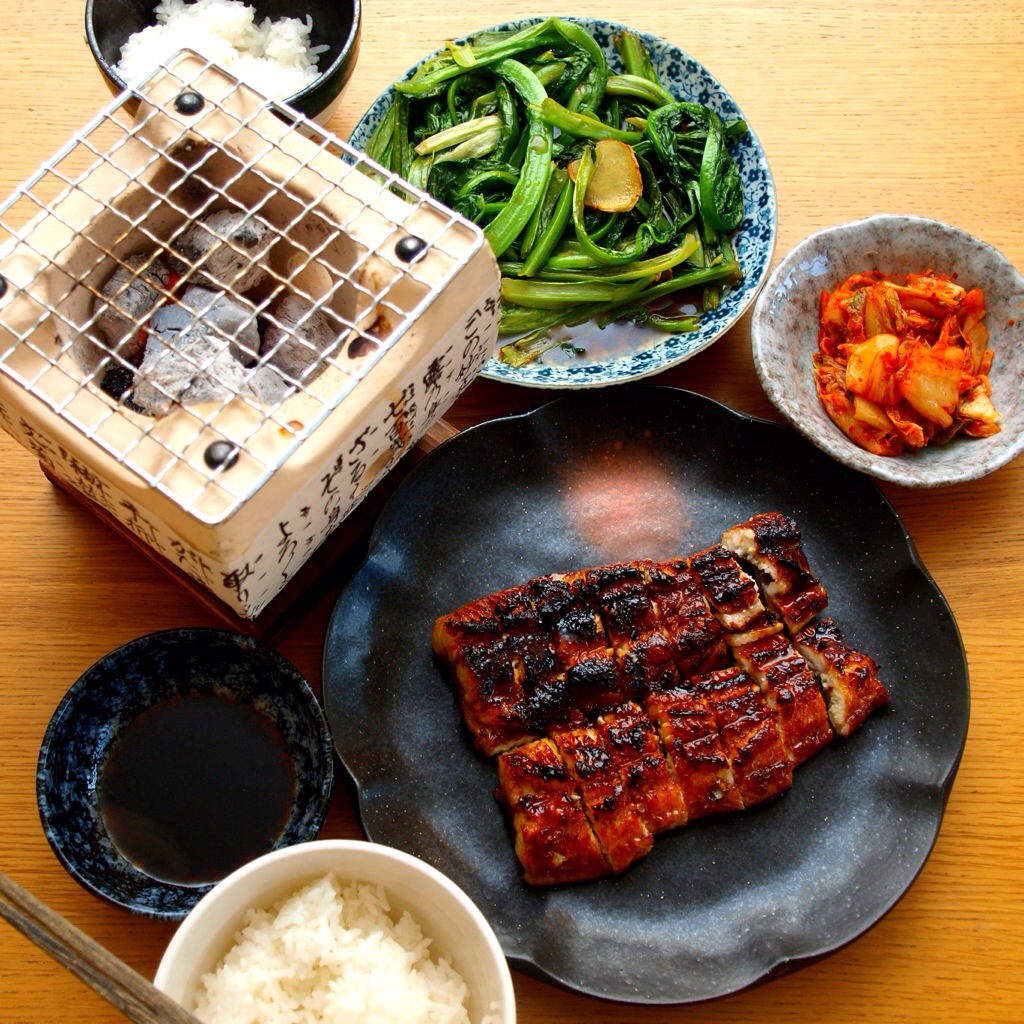