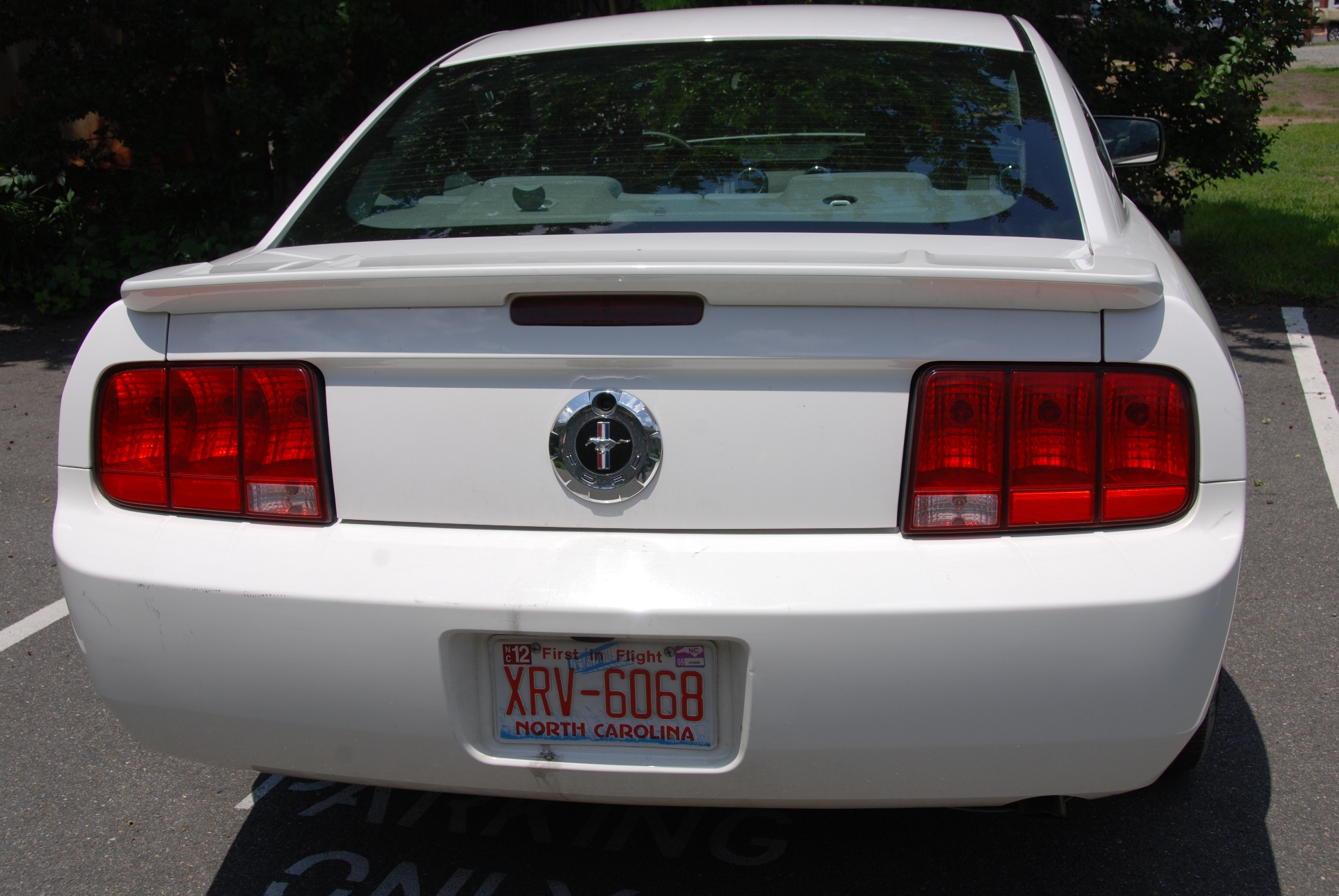 The Mustang I picked up on Saturday had a slow puncture so we ended up replacing him at Richmond Airport. The new one we’ve nicknamed Maurice is in working order, but even with a 4.0 litre (!) V6 on board, this car doesn’t really shift as I’d hoped. That’s probably because it looks like it weighs 3 tons. There is a GT model which develops 300hp, and the Shelby with 500hp, but neither can be rented from Avis. It does make a pleasing noise though, and looks great from the rear.

Driving around you can see that the American motor industry is suffering: Japanese cars are the dominant species on the road. The desirable cars are the European and Japanese brands.  The US cars spotted tend to be large SUVs and massive pick-ups (usually with nothing in the back). 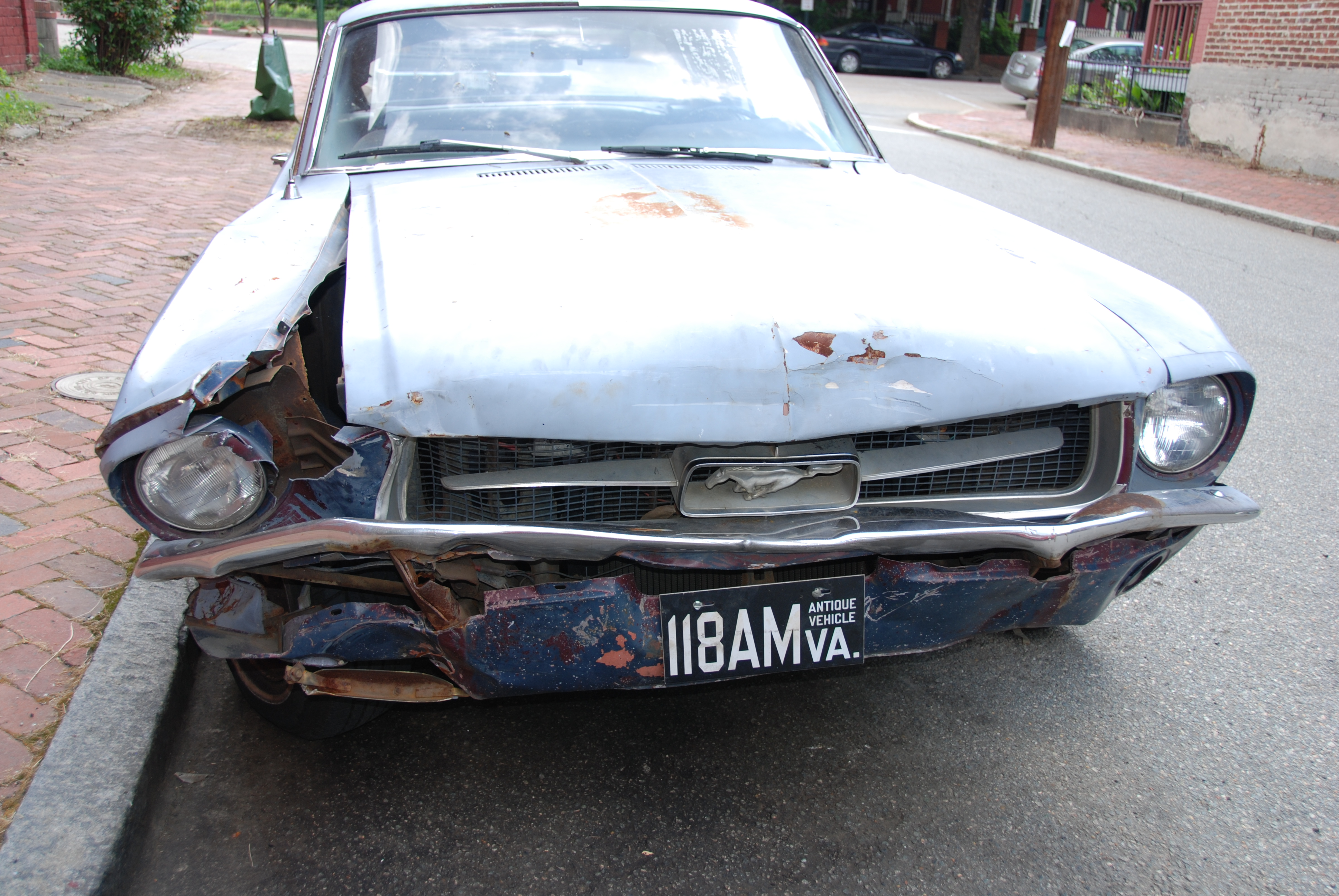 Petrol is still laughably cheap here, going at around $2.30 a gallon (37p a litre), although their standard stuff is 87 octane, which I wouldn’t put in a landmower back home. The super-premium is 93 octane, less than our standard stuff.

Heading down the coast in Maurice, we stopped in Jackson Ward in Richmond. This neighbourhood is great for Soul Food, church shops packed with gospel records and pawn shops. A sign on the bail bondsman’s window offered a $600 reward for the capture of “Cleveland Peoples”.

We stopped in at Croaker’s Spot for lunch. Seafood is a big deal on the East Coast and in the South. Shrimp, clams, catfish, whiting, fried oysters and crab are the typical bill of fare. Sometimes these are dumped into a baguette with some salad and sauce to make a po’boy sandwich. The portions are of course way too much for even my now-stretched stomach. The carbohydrate highs (and lows) I’ve experienced here are out of control, and I find myself hugely hungry but then satiated in just a couple of mouthfuls. Last night I had such a bad starch craving I considered eating an Arby’s burger. Sense prevailed and we dined on cheese and crackers in the hotel room. 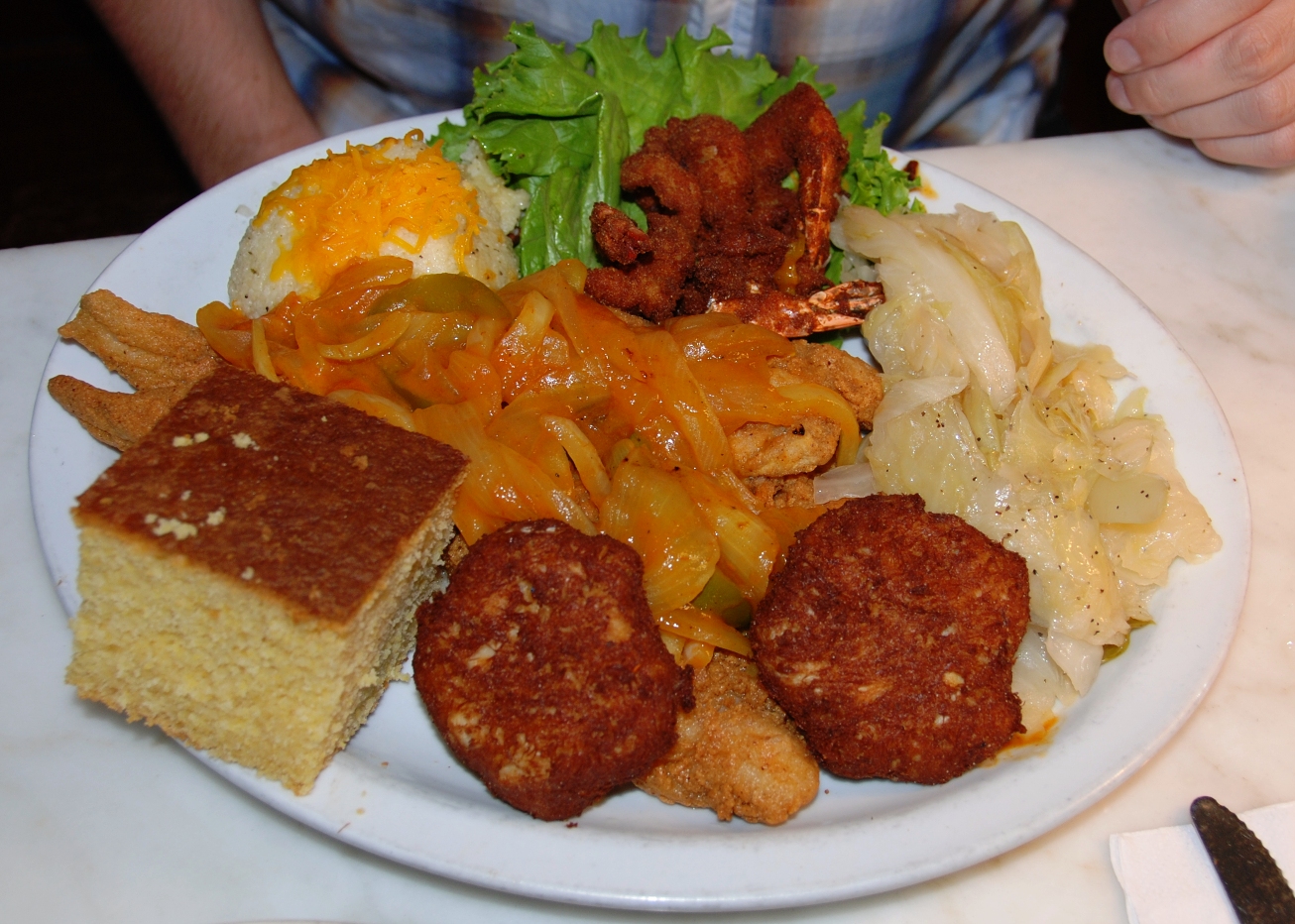 Croaker’s spot offered the motherlode of fish fry: their legendary fried fish served with crab cakes and fried shrimp came with a pancreas-busting assortment of sides: cabbage, corn bread, cheese grits and potatoes. And of couse, it wouldn’t be a Southern meal without  a load of hot chilli sauce. 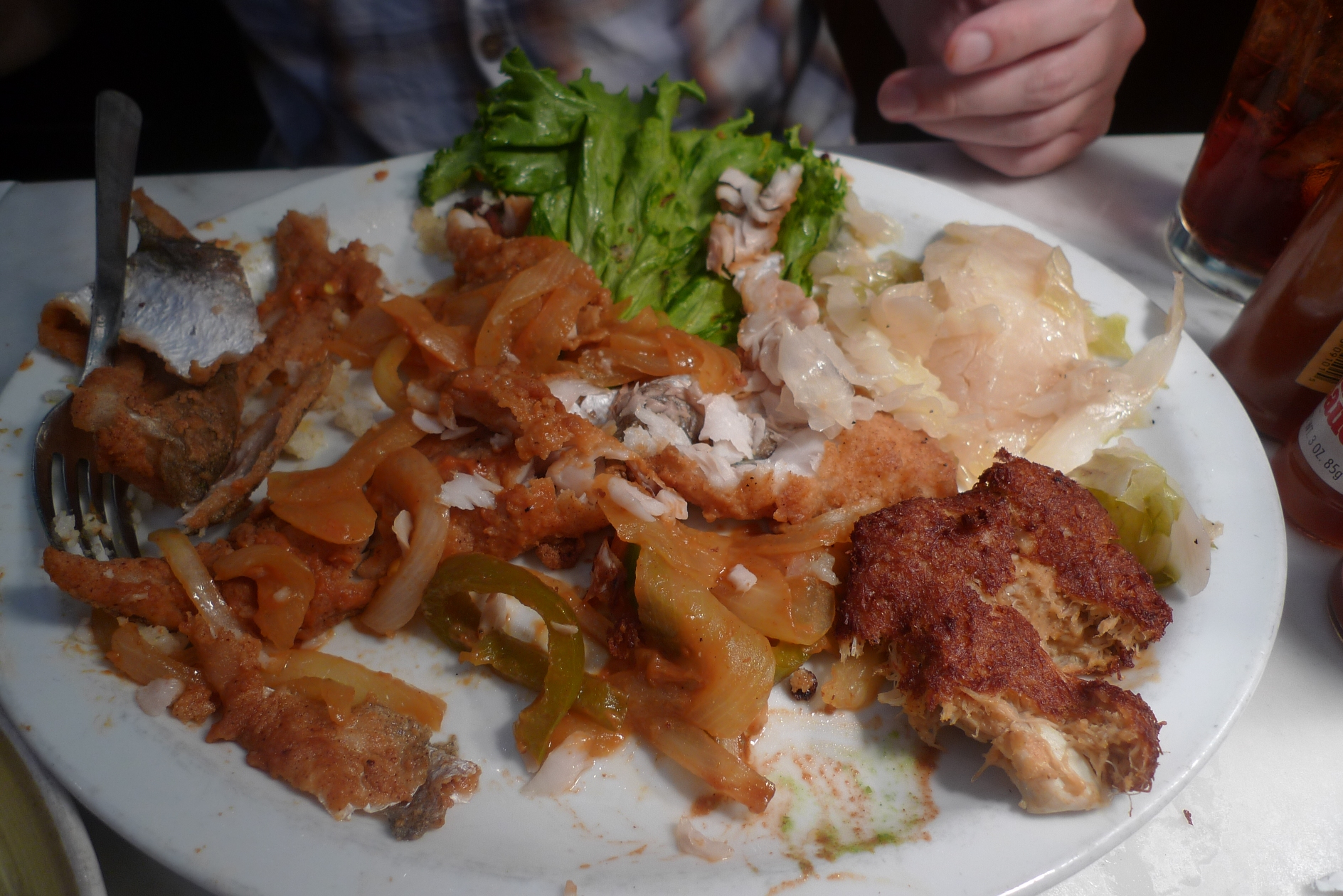 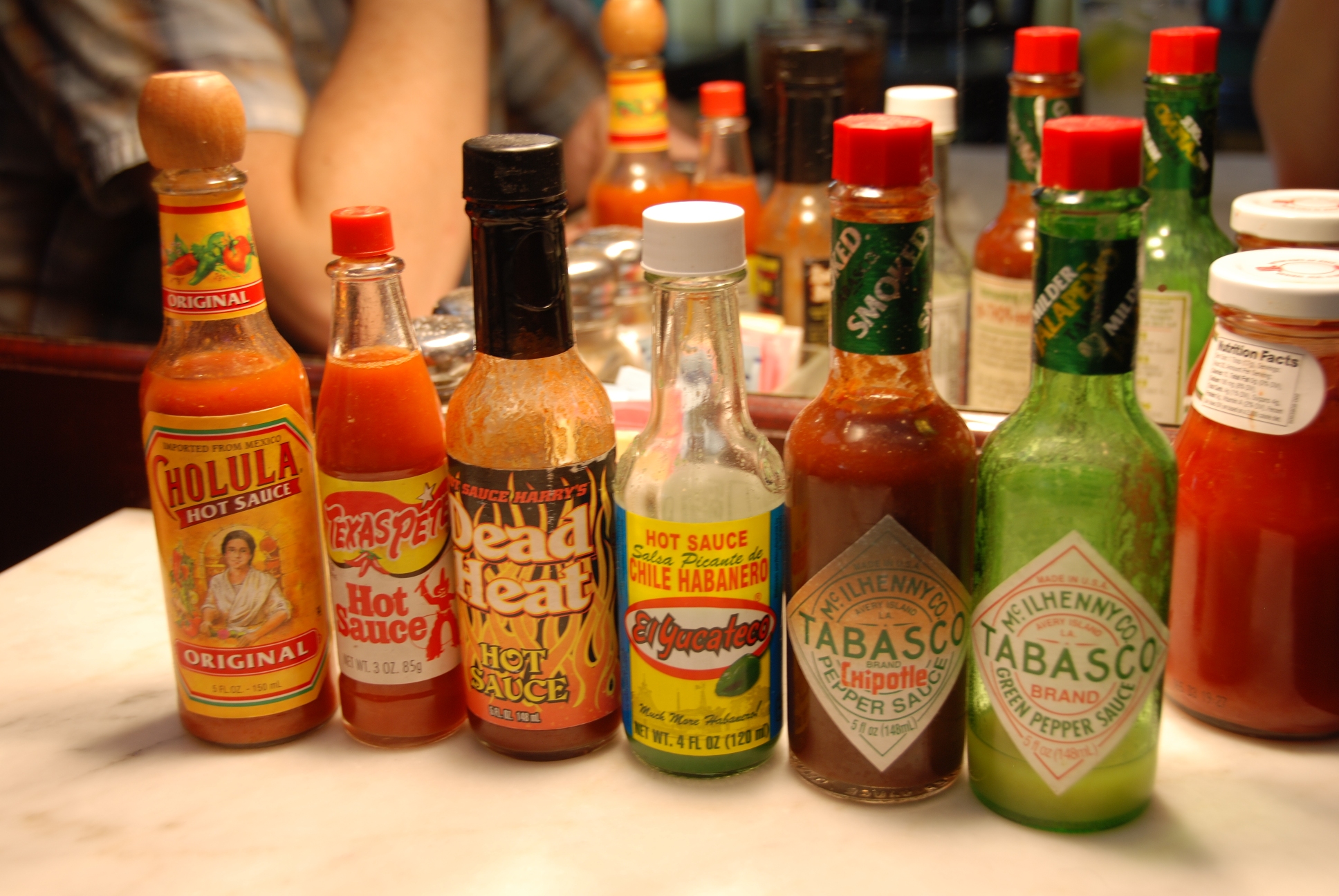 2 thoughts on “Drivin’ the East Coast”