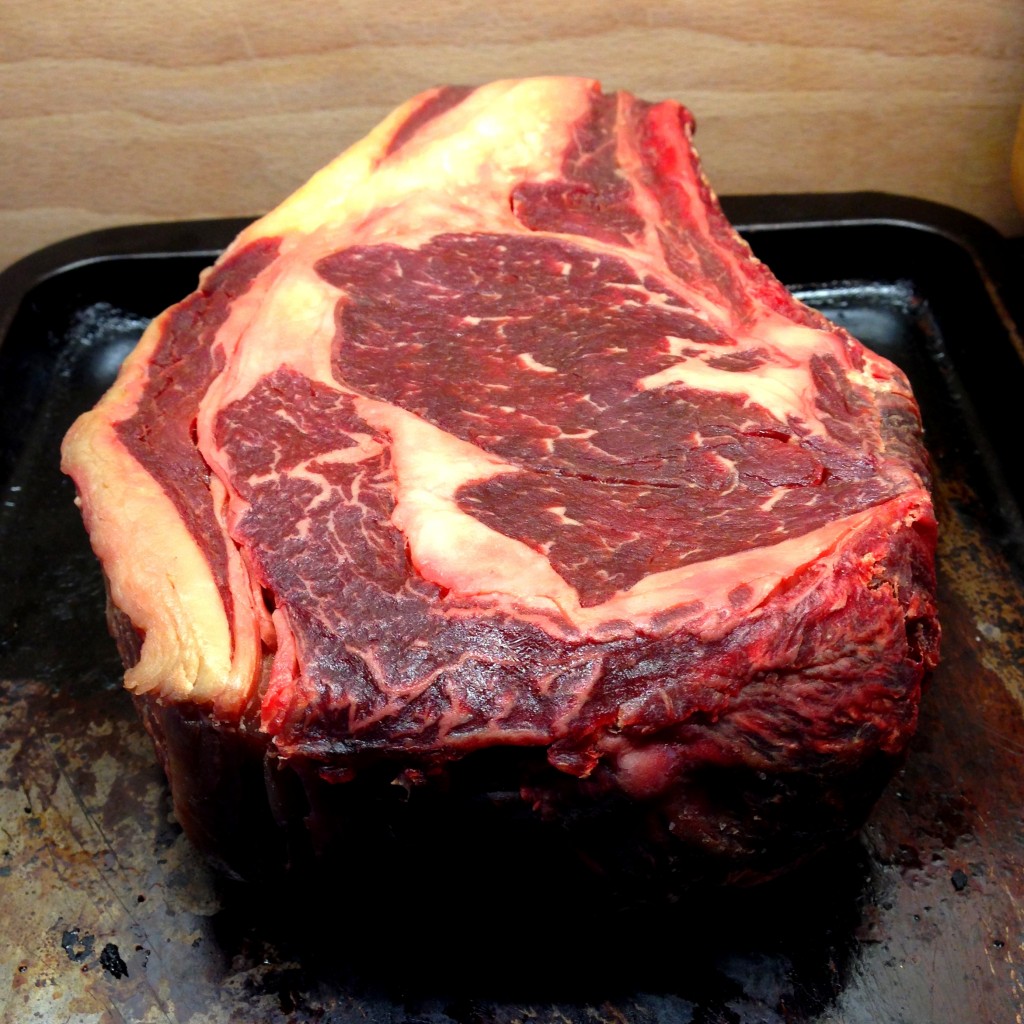 There is the most transcendent joy in eating a beautifully cooked steak at home. Simply cooked, with a crusty charred outside and juicy pink inside. The added satisfaction that it’s cost one quarter what you’d pay in a high-end steakhouse. All you need is good beef to begin with and the rest is obvious isn’t it? Well no, at least I don’t think so because if it was then everyone would be eating top quality steak at home regularly and I don’t think they are. Not nearly as regularly as they should be. So here’s a guide to cooking and eating the best steak possible at home.

The Beef
When I talk about steak I mean a fat steak at least 4cm thick. A forerib on the bone (the French would call a Cote de Boeuf), a wing rib, sirloin on the bone or a T-bone steak. The T-bone (or Porterhouse) steak is the one made famous by New York steakhouses such as Peter Luger where a steak for 2 can cost up to $100. It’s supposedly the best steak in NY and by extension the world, or at least that’s what NYers would like you to think. Peter Luger has first choice of the USDA Prime beef that comes into the city so eating there is truly a pinnacle of steak eating experiences. The steak there is wonderful; soft, juicy and buttery unlike anything us Brits can produce. But there is a deep dogma in the USDA grading system that means beef is graded purely by the amount of fat marbling apparent in the meat (like in Japan). This has led to decades of breeding animals that react better to the hormones fed to fatten them and to the copious amounts of grain used to finish the cattle in the weeks prior to slaughter. This consistently gives fatty marbled meat that is so visually appealing and tender but has ultimately led to the most important aspect being overlooked, beefy flavour.

In the UK we’re unbeholden to grading systems and rely on our senses to judge whether a cut of beef is top quality. I have my favourite cuts of meats; forerib and T-bone. What I look for is properly dry-aged meat at least 4 weeks. The dry-ageing not only improves the flavour of the meat but tenderises too. To my mind it makes all the difference. Good marbling is nice but not as important as breeding and feeding. What do I mean by that? Well take a look at the 6 week dry-aged grass-fed forerib of Dexter beef in these photos. It just screams BEEFY! You will never find this in a supermarket or ordinary high street butcher, that is why specialists like Berkswell Traditional Farmstead Meats and Aubrey Allen are so important.

The Cooking
Everyone knows how to cook steak, right? Put it on bbq and let the flames lick it till it’s done. Or stick it in a screaming hot pan to sear the outside and leave the inside pink. Well you could do that with a thin steak but with a really thick one you might get dodgy results. The outside might be too burnt before the inside is perfectly medium rare or you overcompensate and cook it too slowly and get a grey overdone steak. My favourite way of cooking a steak indoors is the Ducasse method. Which has never failed to produce a great crusty steak with the perfect pink centre. I even prefer it to chargrilling which sounds crazy because surely there’s nothing better than the chargrilled taste of beef fat atomising onto hot coals then permeating back into the meat? Let me explain the method to you then, named after legendary French chef Alain Ducasse:
– Cook your steak on low to medium heat in clarified butter on one side for ten minutes.
– Flip and cook it on the other side for another ten minutes. All while basting with the clarified butter.
– Let it rest for another 10 minutes before carving into thick slices. Dress the meat with the beefy butter left in the pan. That’s it! 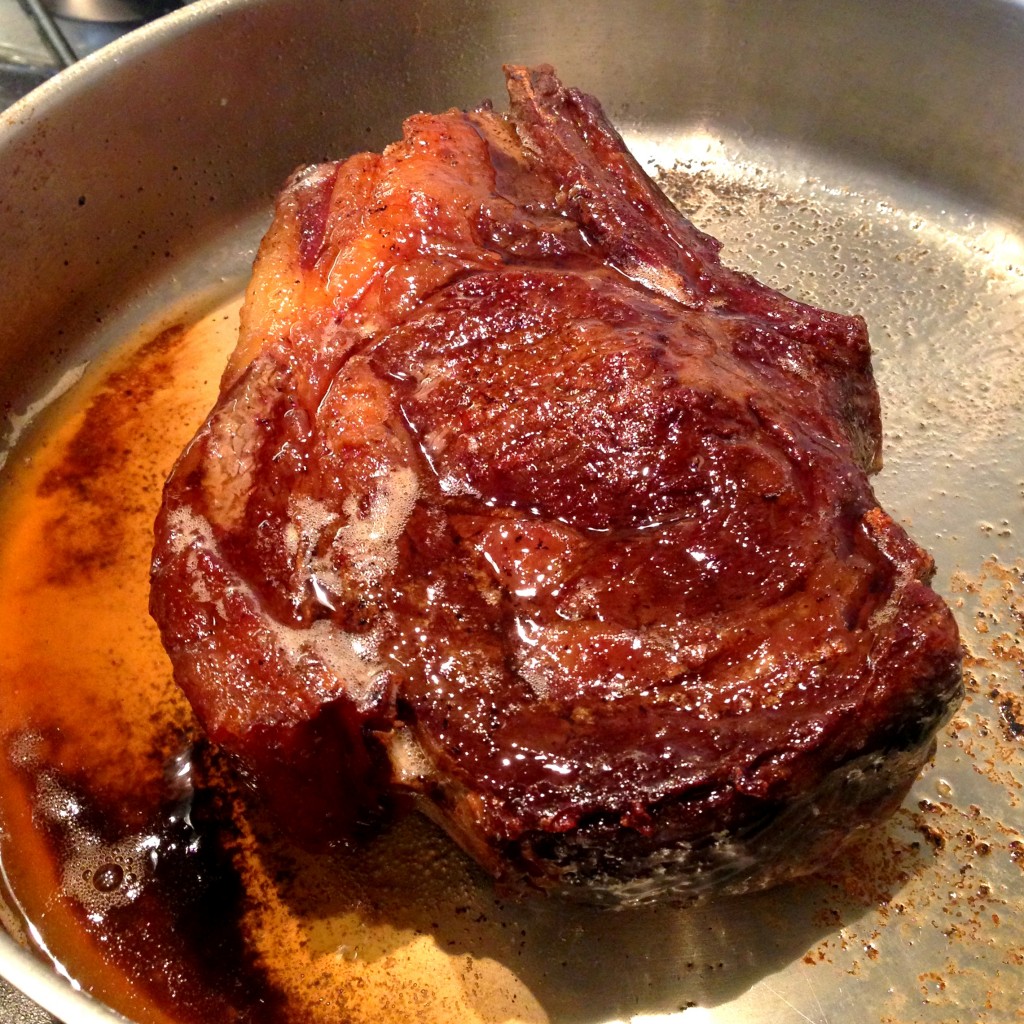 It feels counter-intuitive cooking a steak for so long but provided it’s thick enough you will get the most awesome buttery crust that’s packed with umami-rich Maillard compounds. Let’s not forget where most butter comes from, no wonder it has such a wonderful affinity with beef. If you were so inclined you could even add a sprig of rosemary and a couple whole cloves of garlic to the pan. Once you tasted this simple way of cooking steak you will always go back to it. A point to note, if there a fat cap on your steak then gently render that first for 5 minutes. If you like your steak rarer then cook it straight from the fridge. If you like it more well-done then I can’t help you at all…

Honestly, I think this method produces a better tasting steak than in any steakhouse restaurant. The high-end places use Josper or Inka grills and make a selling point of these special chargrills. But really I just want someone to stand over a pan basting my steak for 20 minutes! There’s not a steak restaurant in the world that will do that so that’s why I like to cook steak at home. The result is clear: 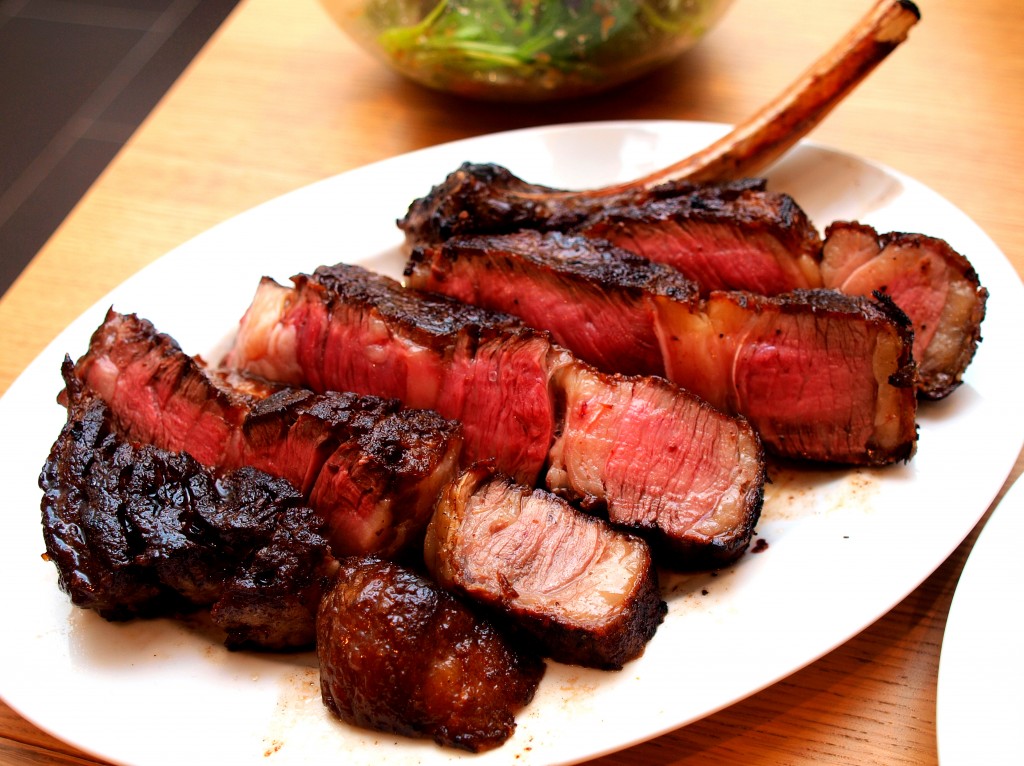 Seasoning
When do you season a steak, just before hitting the pan? Ten minutes before? How about ten hours before? I favour the last, the first is acceptable but never ten minutes before. The following three photos shows why: 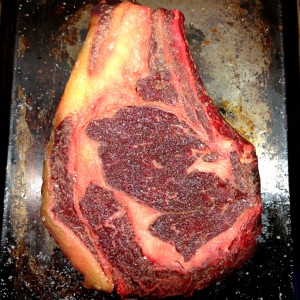 The first shows the steak freshly sprinkled with salt, when this hits the pan a nice salty crust will form but the meat inside is not really seasoned. 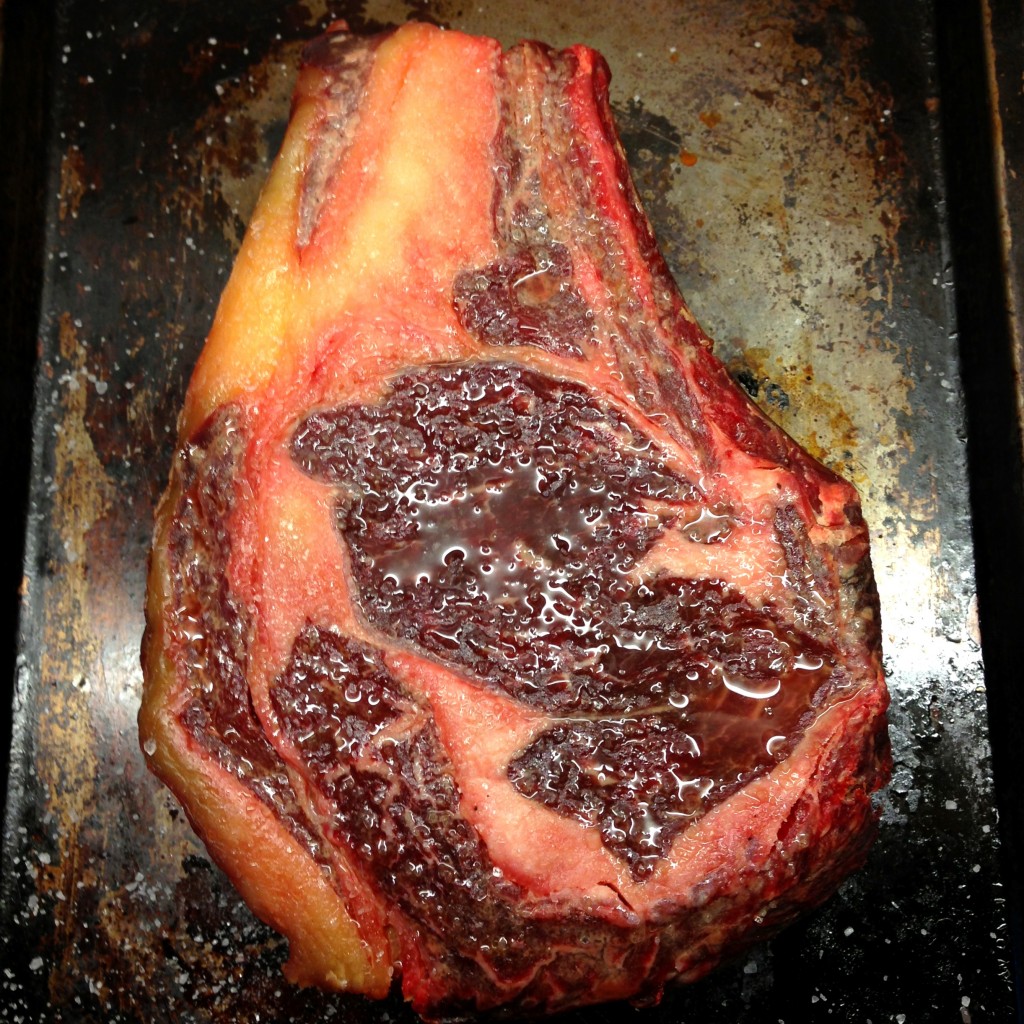 The steak after ten minutes, the salt has drawn out the water from the meat and it’s pooled onto the surface. When this meets the pan the meat will tend to stew preventing the formation of the nice flavoursome crust. The meat is not seasoned and it’s lost a lot of moisture, bad news all round. 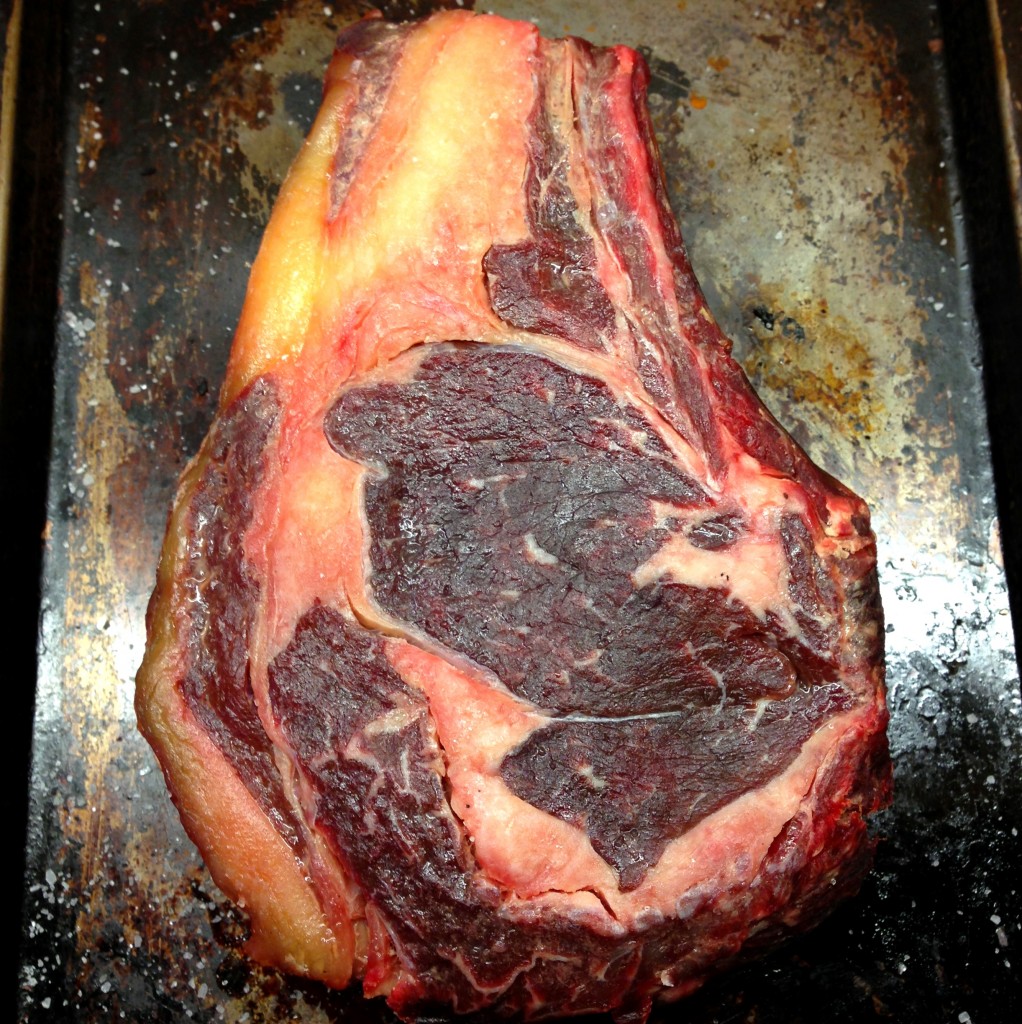 After a few hours the salty water has been drawn back into the meat seasoning it from within. The surface is dry so there’s nothing to stop a great crust from forming.

So it’s clear, it’s best to season on both sides a few hours beforehand. Or if you’re in a rush season on one side just before frying that side and season again just before flipping. Never ever do anything in between.

Sesame Miso Sauce
Ketchup, bernaise, pepper, chimichurri? There are a lot of options when it comes to saucing. But here’s a recipe for a Japanese style steak sauce that might make you forget all those others. I retro-engineered it from one I had in a steak restaurant in Fukuoka. It should be mixed with freshly ground toasted sesame before dipping your meat into it. In the restaurant we each had a small bowl with grooves etched into it called a suribachi. The sesame seeds are ground in this before the sauce is added. The combination of the sweet deeply savoury and deep nuttiness of the sesame is simply sublime (it’s also great with pork):

200ml ichiban dashi made from katsuobushi and kombu
100g brown miso
120g mirin
75g sugar
50g rice wine vinegar
Simmer the above for 15 minutes then add a teaspoon of finely grated ginger and simmer for another 5 minutes. Take off the heat and stir in one tablespoon of yuzu juice (or a mixture of lime and Seville orange). The sauce will keep for a while in the fridge. 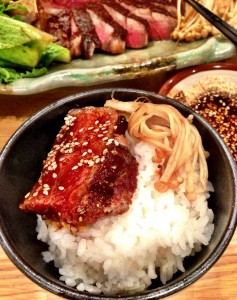 11 thoughts on “Cooking a Fat Steak at Home”