We’ve been remiss here on SmokeandUmami, a Birmingham food blog and no mention of two of our most precious resources. Except for a short hiatus whilst the Bull Ring was being redeveloped, the Indoor Market has always been there to serve the city with fresh fish and meat. Down the road is its ugly sister the Wholesale market, threatened with extinction but hanging on for salvation. Both markets hold some wonderful fresh produce, the only thing they ask of you is to be brave and get stuck in. So to help you out here’s a guide to some of my favourite stalls in both markets, what’s good to buy and what to avoid. All opinions are my own, a Brummie who has been using the markets for over 30 years. Let’s start with the INDOOR MARKET: 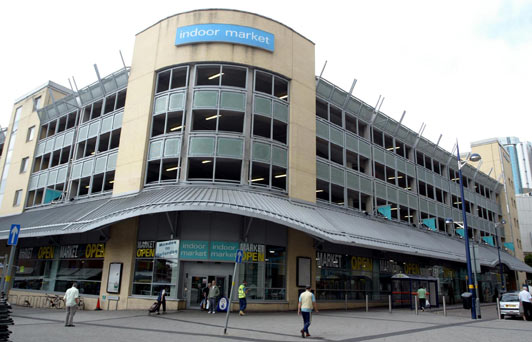 SHELLFISH
George Smith and Pearce’s
These two have been here since the old days when the market was in the dank basement of the old Bull Ring. The rivalry between them has pretty much stayed the same too, which is a good thing because between them Birmingham is served with some great shellfish. You can buy fresh (by which I mean live) shellfish such as lobsters, crabs, scallops, mussels, oysters and clams six days a week Monday to Saturday. Out of habit I prefer George Smith’s to Pearce’s because I think they’re friendlier. But really the quality is about the same. I love buying live brown crabs, I think they’re the most delicious shellfish of all. The folks at Smith will let you handle and choose the one you want, they always seem to have more ‘in the back’ too. Pearce’s are a bit funny about you handling their critters. Both have beautiful native lobsters when in season, which I urge you to buy in preference to the dark shelled Canadian lobsters. The flesh of our blue native lobster are denser and sweeter. Both shops have an eat-in shellfish bar that serve prepared crabs, lobsters, oysters, whelks, mussels, cockles and even jellied eels. Though only Pearce’s sell live eels when in season.

FISH
H Satchwell*
Possibly the most unassuming fishmongers in the whole market. A small unit next door to George Smith’s, with only ever half a dozen fresh fish on display singly. Each fish is draped in a clear film, all in all a very sparse looking fish counter. But if you look closer, every fish is the best example of its kind and very fresh. If I were to open a sushi bar in the market I would make Mr Satchwell my very best friend. He always has wonderful flatfish such as brill, dover and lemon sole, large chunks of halibut and tuna. Again he only displays his fish singly but has more in the back. What’s more he has the best selection of kippers, smoked haddock and mackerel. I love kippers, try the Craster type if you’re a kipper fan. They’re fatter and juicier than the Manx kippers.
*not to be confused with W Satchwell, a new stall run by a cousin
AJ Barlows
In the centre of the market, this large three sided unit is half poultry and half fish. But that fish half consistently has the largest selection of fish in the whole market and is always bustling with activity on busy market days. I often buy their trays of farmed sea bass or gilt-head bream, usually 4 for a tenner, which makes them cheaper than the wholesale market. The turbot is always good here too, possibly my favourite fish much prized by Cantonese cooks for its firm white flesh and thick gelatinous skin.
All Seasons Fishmongers
Specialist in exotic fish from warmer waters, mostly previously frozen but impressive all the same. Especially the freshwater Rau a monstrously big river-fish from India, which one day I will pluck up the courage to buy. They only thing I do buy here regularly is octopus. These are the meaty twin sucker kind that taste much better than the single sucker variety that the rest of the market sells.

MEAT
I don’t buy much meat at the market. The quality in general is middling at best but cheap! So here’s a very short list of what to look out for:
Walter Smiths
Greatest Pork Pie you will ever eat, that is all you need to know. Ok maybe one more thing; point to the one you want otherwise they’ll pick out the oldest one for you. All market butchers are inately crafty.
Enochs
Usually a bit of bun fight at this pork specialist, if you can cut a swathe through the Chinese folk then the pork isn’t bad here. Though not all their pork is British, you have been warned.
Hong Keen
New kid on the block, a Chinese butchers with some decent cuts of beef and pork. Nice line in beef and pork offal, if you’re into that sort of thing.

GROCERIES
China Mini Market
This place is the literal meaning of the word gem, something tiny and precious. Here you will find all you will ever need to make any Oriental (far Eastern) dish. From its awkwardly shaped frontage you will find fresh produce ranging from tofu, fish balls and noodles to Thai basil, banana leaves and galangal through to durian, mangosteen and rambutan past gai lan, choi sum and tong ho. Peek at the back wall and it’s crammed with every Oriental cupboard staple; soy sauce, chilli sauces, coconut cream, spices… Shout up here, the ladies that run it don’t stand on ceremony and don’t like to waste time. Essential one stop shop for all your Oriental needs.
Global Produce
Run by the same lot as the China Mini Market. Some of the produce here is replicated but sells more Western groceries. Apples, pears, oranges, leeks and celery replace pak choy and green mangos. However this shop has a slower turnaround and the produce is a little more tired than its Asian counterpart so choose carefully. Occassionally you will find something extraordinary here, a golden tamarillo anyone?

OTHER
There are numerous West Indian stalls in the market, two near the Dudley St doors African Foods and Claras back onto each other and basically sell the same goods. Look out for the city’s finest patties Fenky Janes on sale at African Foods.
There are Halal butchers at the market too and I’ve bought the occasional mutton from them, the quality is variable though.
Mr Fish specialises mostly in game! But don’t fall for their patter, a lot of their stuff is very tired looking indeed. 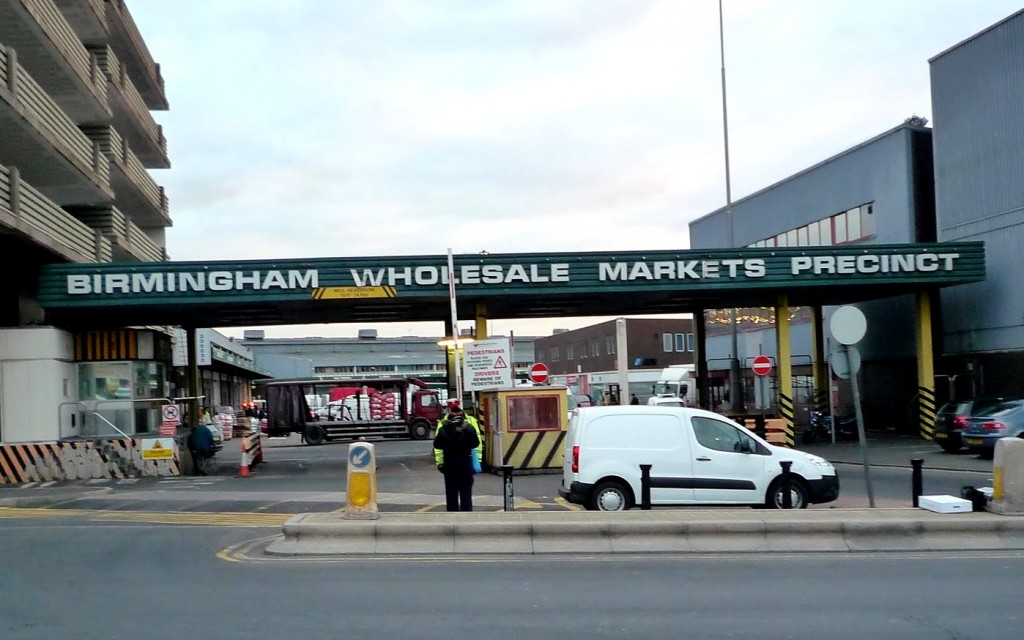 WHOLESALE MARKET
100 metres down the road out of town is the concrete carbunkel of the Wholesale Market, the largest of its kind in the whole country. The market is split into four blocks: Meat, Fish & Poultry, Fruit & Veg and Horticulture. It’s open from 4am onward Monday to Saturday and is accessible to the public. For a few years there was a guard on the gate that stopped public vehicles from entering, you had to be in a trade vehicle or have a permit to drive in. So there was no choice for members of the public but to walk in. But I’ve noticed this year that the guard has disappeared so you can drive in now, just be careful of the forklifts and where you park. Of course as with any wholesale market in the world you need to get there early. I usually go around 7:30am to make sure there’s still plenty of fresh fish available, because seafood is the primary reason I get up early on either a Wednesday or Thursday (these are the best days for fresh fish). The fish & poultry section is to the right of the complex as you enter, follow the fork right and it’s the large building on the left. It used to house a dozen or so wholesalers but now it’s only half that and dominated by two large companies J.Vickerstaff and Caterfish.
Vickerstaff has more variety, stocking African and Asian species and salted dried fish from around the world. See if you can spot the box of red herrings that always seems to be there. To my eye though the quality of the fish at Caterfish is consistently better and they always have lots of good looking salmon, bass and bream. Caterfish also have 3 live lobster tanks in their cold storage room, if you are a lobster fan then ask to be shown inside where you can dunk your hands into the chilly waters and pull out your own fresh lobsters.
But my favourite fish wholesaler is WS Scott, a smaller operation nestled between the two big boys. Fresh prawns galore from little ones to banana sized ones from Africa. Always the best turbot here, usually two sorts wild and farmed. I prefer the farmed, from icy cold clean Norweigian waters they taste wonderfully clean. Dover soles, lemon soles, live crabs, lobsters, scallops, razor clams all usually very good quality. They are the only stall where I’ve bought live sea urchin. For that reason alone they will always be my favourite!
The poultry and egg section is adjacent to the fish market. H Bellingham sell Label Rouge French chickens which is essential for one of my ultimate dishes Hainan Chicken Rice. They also sell duck, game and around xmas time whole lobes of foie gras.
The wholesale fruit and veg market is enormous and there’s not a lot that the average punter can buy here except if like me you are a mango fanatic. Get your boxes of Indian or Pakistani mangoes from Bidwalla when they are in season.