Next time you roast a joint of belly pork I would definitely recommend brining it in advance. Brining improves the texture of the meat, keeping it moister, and also seems to help with crackling formation. If you get the brine right you don’t have to worry about seasoning the outside. And you can also add some complementary flavourings which will penetrate within the meat- I chose juniper, bay leaf and garlic, mainly because they were to hand but you can express yourself. I cooked a small belly joint around 1.5kg for around 2.5 hours at 130 degrees C and then cranked up the temperature to around 210 degrees C for 20 minutes to finish the crackling.

Again I am struck by the variability in recipes out there. The venerable Fergus Henderson, suggests in his brine recipe 600g of salt to 4 litres of water and does not specify the weight of pork belly. Assuming a 2kg piece, then this would be a 10% brine. He would have you brine for 3 days. I suspect this will result in something unpalatably salty for most people. This recipe from Anna Hansen uses less salt, but unhelpfully does not state how much water to include just to use enough brine “to cover”, which doesn’t take into account the variability in your pot. As an aside, if whatever I am brining can fit into a Ziploc bag, this is my preferred method. Just be sure to double-bag it in case of any leaks. I can’t even work out the brine strength for this New York Times recipe as they use the insane Imperial system (actually the US customary units system, come on Americans get with the programme – yes, that’s two m’s and a e).

So in conclusion, when brining, consider how salty you would like the result to be, I would suggest a palatable range is between 3 and 5%. I find it neat that sea water is around 3%, a nod to our amphibious past? You can find out what you like through experimentation. However, bear in mind that curing is not particularly efficient and you should consider at least two additional factors: time in the cure, and thickness of the meat. I suspect that explains why some recipes call for such high salt concentrations. There is considerable variability in terms of length of time required to cure and this mainly depends on the thickness of your pork belly. A thin piece should be done in 24 hours, but thicker pieces will require longer.

I am working on a Unified Field Theory of Brining, but still need to figure out some of the formulas involved. Call me Brinestein.

So, a few questions for advanced blog readers: 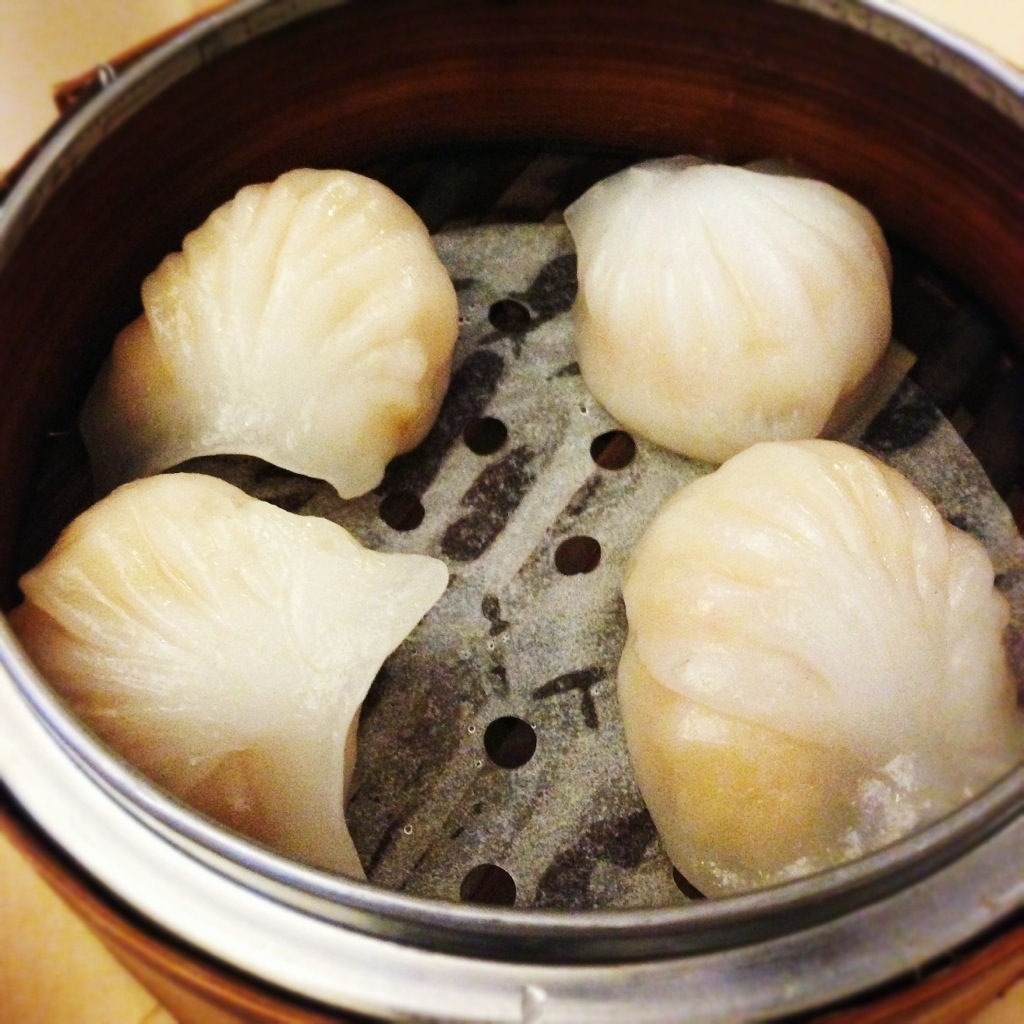 A Cantonese foodie can only live for so long without blogging about Dim Sum. Since my last post about Chung Ying Garden I’ve done some extensive research on your behalf.

Wing Wah next to the Chinese hypermarket Wing Yip in Nechells has probably the best Cheung Fun 腸粉 in the whole city and generally the standard of the Dim Sum there is very good indeed. However I don’t know if I’ve been unlucky because everytime I’ve been I’ve had the noisiest migraine inducing experience. It’s just too popular with the buffet crowd who descend en masse at most lunchtimes. All-you-can-eat-Chinese-food seems to pull in some big noisy families which makes the vibe somewhere between that of a theme park and feeding time at the zoo. A shame for those eating from the Dim Sum menu and looking for a more relaxed meal. But try it out yourself, there’s plenty of free parking at least!

No I think I’ve found the best overall Dim Sum experience a lot closer to Chung Ying Garden, at the original Chung Ying. The ex-chef of my old favourite the Golden Pond has moved there and it shows. Every dish I’ve tried has been excellent. Har Gau 蝦餃 (pictured) is the litmus test for me. Like good nigiri sushi it looks simple but it’s in these apparently simple things that you can really judge the skill and discipline of the kitchen. These I can’t fault. Though I still think the steamed chicken feet in black bean sauce 豉汁鳳爪 not as good as they were at GP! Never completely happy am I?

I had high hopes that China Court would surprise me after so many years. But recently eating over 50 items there in one sitting with 12 other Chinese diners, I realised those hopes were completely unfounded. None of us thought it was any good. There was one dish I actually thought was decent, but the rest was poor to middling. The taro puffs 芋頭角 were actively offensive, appearing to have been reheated several times over a considerable length of time. One to avoid!

Shanghai Blues (ex Golden Pond) is decidedly average and for some reason don’t do crispy fried squid 魷魚鬚 which is a must amongst my circle of friends. Though some of the Sichuan options can make it a little more diverse, the basic quality of the Dim Sum isn’t really up to level of the Chung Yings.

The Dovehouse parade of shops, where Dovehouse Lane meets the Warwick Rd in Solihull, may be the most complete parade of independent businesses in the whole city. From babywear, drycleaners, chemist, rugs, chip-shop, Chinese takeaway and Indian restaurant to hairdressers, off-license, boutiques and funeral directors, all of life’s necessities are covered. There’s even a bakery, Sonya’s Bakehouse, but to be honest I don’t much like the bread there. For an independent bakery they don’t half make their bread taste bland and slightly mass-produced. They’re going strong though so their customers must be happy. Maybe bland, safe bread suits the Solihull palate!

The real wonder of this packed parade is that there is an actual fishmonger in amongst it. Yes a fishmonger, you remember those, they’re like a butcher but they sell fish. Vickerstaff fishmonger is tucked into the back of Cornucopia which is an amalgamation of three businesses. The front of the shop is split between a greengrocer/florist (the Cornucopia bit) and Dovehouse Butchers (nice hogroast at the weekends). Vickerstaff never seems to have much fish on display, maybe a few pairs of kipper or some salmon steaks. But it’s one of those places where with some notice they can get you anything you want. So make friends with them because they may be the last fishmonger outside of the Indoor Market (and supermarkets of course). At the time of writing I believe it’s the only one out there, and you thought high street butchers were becoming a rarity. 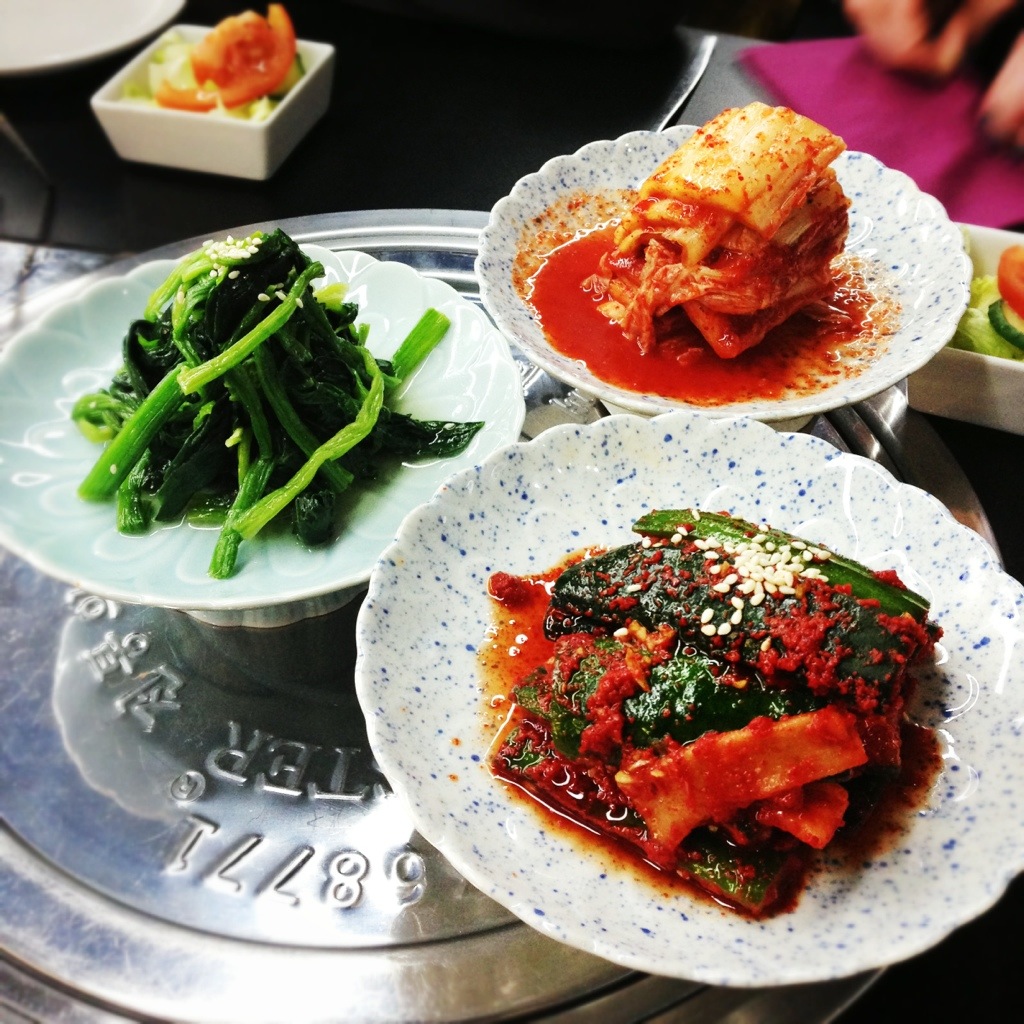 Someone who’s culinary opinion I respected very much recently declared Miss Korea the best restaurant in Birmingham. Well I don’t know about that, it could well be the best Korean in town, but with a choice of two real Korean restaurants the competition isn’t exactly stiff!

Korean bbq has been around for a few years as an option in a few of the new wave of Chinese restaurants such as BBQ village. But it was only a year ago that Brum got its first wholly Korean restaurant in the form of Miss Korea. Located a couple of doors down from Min Min Noodle Bar, the sleek blackness of the interior and the cooking equipment embedded in the tables leaves you in no doubt that this place means business, Asian business. The charcoal burners can be quite intimidating for newbies. Hell they’re still a little intimidating to me. I’m still never sure which way to flick the switch or turn the flange as the signs are all in Korean. But before you get to all that grilled stuff there is the wonderful array of Banchan, Korean appetisers, to explore. Kimchi, which is slowly taking over the world, comes in cabbage and cucumber forms here and are essential to start off your meal. Also the water spinach, but not so much the seaweed as it’s a bit tough and oddly flavoured and I’m usually all over seaweed like seaweed is all over beaches.

To kick off the meal proper the kimchi fried rice with pork is a winner, a slightly greasy mound of fried shortgrain rice studded with pork accompanied by a seriously snotty fried egg that mixed together makes a wonderfully moreish dish. Or try the various Bibimbap, the most famous Korean rice dish, a hearty melange of fresh ingredients atop plain rice served in a searing hot stone bowl. Asian comfort food at its best, both particularly good when slightly drunk. As is cooking your own meat on the blazing hot charcoal heated hotplate. Thinly sliced marinated beef ribs (galbi) or beef and pork strips (bulgogi) are probably the best options. Quickly seared then wrapped in lettuce with a little ssamjang (sweet Korean chilli sauce) it hits plenty of gastronomic pleasure spots. However, the unmarinated beef ribeye steak would be heavenly if it looked like the nicely marbled piece shown on their menu but the real life offering is clearly sub par and not fit to be grilled in such a way.

Some people are put off by the idea of cooking your own food at a restaurant but I think the whole experience is really rather good fun. Just remember this when your waitress is changing your hotplate regularly because you’re choking the restaurant out with your grilling ineptitude. Don’t worry because you’re in good company, I have at least three changes every meal. It makes them very grumpy indeed. The service can be a little cold which may be a management issue because they also reject requests for tap water. An attitude they should seriously reconsider and the reason why Miss Korea cannot be called the best restaurant in Brum.