A couple of useful vegetable curry recipes courtesy of my bud Mark. I’m a big fan of recipes that only specify quantities when they are important. I like to be given the freedom to express myself when cooking. Although recipes which specify quantities in slavish detail can be ignored they then tend to spoil your fun by sending out subliminal bad vibes from across the kitchen, as if to say “how very dare you”. My favourite cookbook, Fergus Henderson’s Nose To Tail Eating is parsimonious in its detail, with many recipes being only a couple of lines long. He shares this in common with the legendary French cookbook “Ma Gastronomie” by Fernand Point. Such recipes give you the confidence to know a dishes intention without taking the joy out of cooking. The counterpoint would probably be Delia or Heston – both cooks that like to leave nothing to chance. 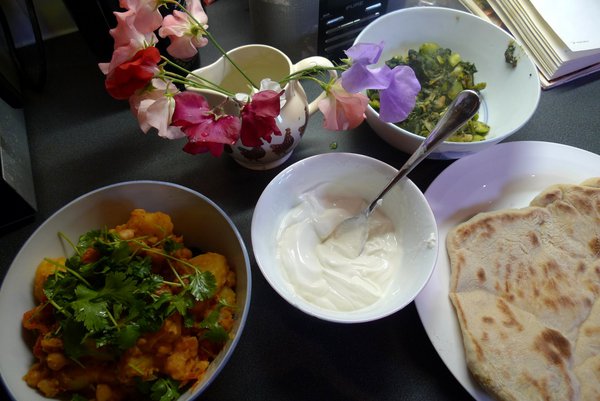 Update on yesterday’s post. Despite my misgivings about the vegetarian paella recipe I was pleased with the end-result. The artichokes, beans and peppers were a decent substitute which was a happy surprise. The heavy use of smoked paprika, saffron, noras peppers and a well-endowed stock meant there was sufficient depth and complexity to distract from the absence of any meat protein. In fact I think the complexity of flavours would have been spoilt by adding a few prawns.

I was worried beforehand because the stock I’d made tasted rather bitter and too much of celery and didn’t have that roundedness you’d associated with a chicken stock. I wonder if I may have put too many fennel seeds in. I put the noras peppers in whole – by mistake – and their seeds may also have contributed bitterness. And I think 15 sticks of celery was too many. I will tweak this next time. But actually the final result wasn’t bitter in the slightest.

The first one dish I made had less rice than I was planning (perhaps 1kg, I didn’t measure it out) and about 3.5l of stock which wasn’t quite enough liquid so I committed the heinous crime of splashing more over as it cooked. As a result I fairly burnt the bottom, but as the soccarat is the best bit so I wasn’t too worried. It tasted really good especially after the seasoning was corrected last minute.

The second one had more like 1.5kg of rice and about 5.5l of stock which was about the correct ratio but I felt the result was a bit rice heavy. My original calculation of 1.25kg rice / 5l stock would have been right. It was less flavourful by virtue of having to dilute with quite a lot of water (somehow I only ended up with 7litres of stock despite aiming to make 10). But it felt slightly more “right”.

Most people preferred the second but I think that’s because they were a bit tipsy at that point. Another lesson is that you really need the stock salty, as in oversalty because the rice can easily be bland even if the salt balance seems OK when you taste the stock. This is hard to rescue post-facto so better to have a heavy hand at the start. I was worried I’d prepared too much but both pans were clean in minutes, despite giving out small-medium sized servings. One final lesson is that a paella takes a good hour if starting from scratch so it is a long wait for people if they miss the first batch.  All in all a good experience for the next attempt!

Oh I should say thanks to the Tapas Lunch Company for getting me the rice, piquillo peppers, and olive oil in time for the weekend!

I am tasked to cater this weekend for my bosses 50th birthday. I decided to cook paella. However, there is a strct requirement for the paella to be vegetarian. Paella is not a typical vegetarian dish, benefitting as it does from chicken stock, chorizo, seafood etc. But helpfully Moro have included a recipe in their Casa Moro book and I decided to use that, tweaking it slightly by adding some broad beans as they are in season. There are a few notable points when deconstructing this recipe. Moro reckon on 4 times as much stock as rice which is more than you will see in certain recipes, but assumes you are using a high-quality calasparra/bomba rice which will absorb a great deal of liquid. They also suggest 62.5g of rice for a main course portion, or 41g for a tapas style portion. This is less than you will find suggested in various howto guides on the net. Although paella is all about the rice, I think the lower amount probably yields a more interesting result so I am figuring on 50 portions of 50g each, cooked in two batches. Here’s a Google spreadsheet I knocked up to help calculate quantities for a vegetarian paella with an example for 50 (2 x 25 portions). I’ll report back.