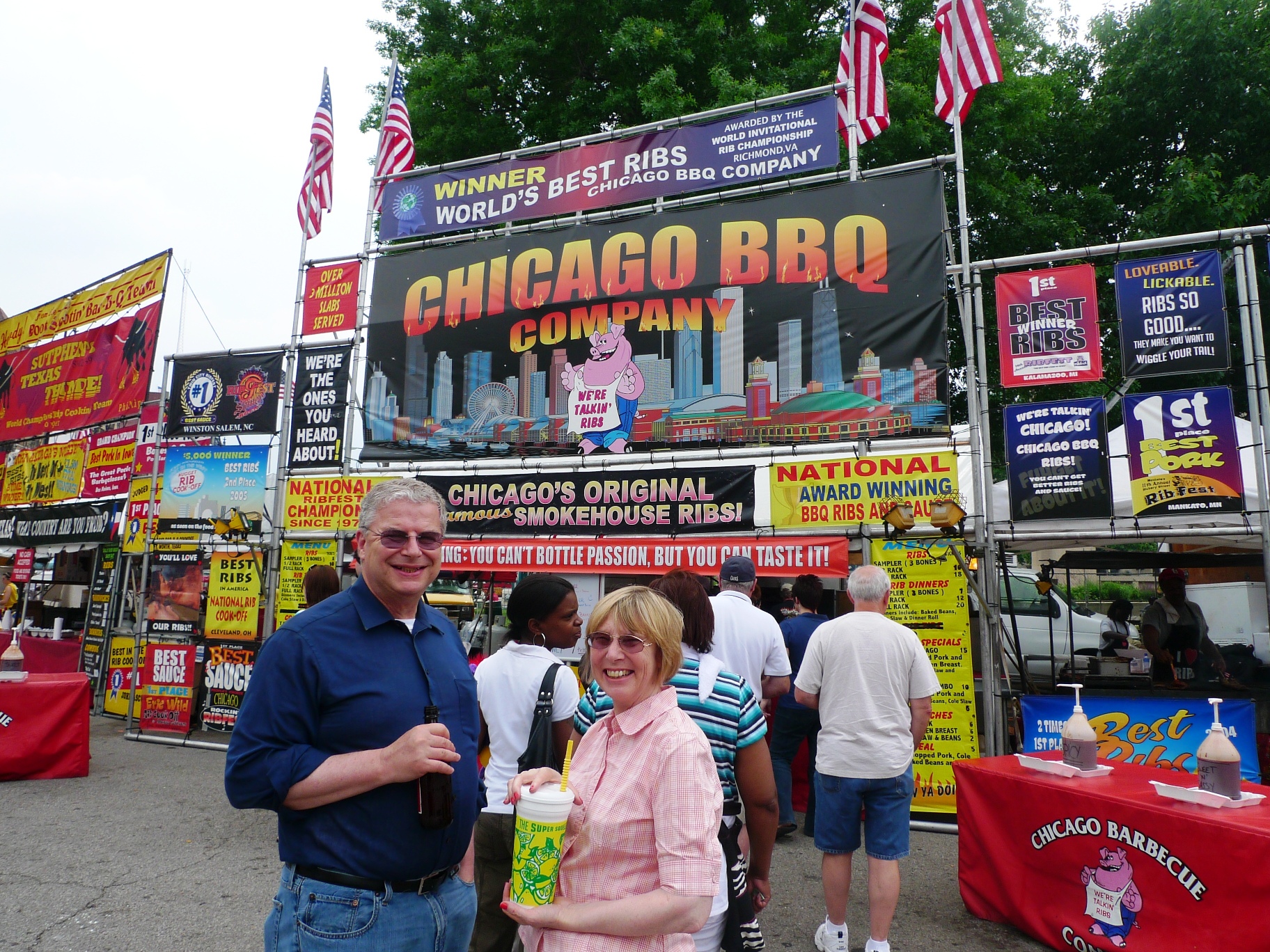 As you know, BBQ is a big deal in the States – and mid-Westerners like to think their version is the best. The ultimate and largest barbecue festival is the American Royal, held close by in Kansas City, Missouri at the start of October with almost 500 barbecue teams competing.

George let me know the mid-Westerners just call it “ribs” here, not BBQ. There are plenty of differences between mid-Western ribs and Southern barbecue, I won’t elaborate but Wikipedia goes into some details here.

Being Memorial Day weekend, I was sure there must be some serious barbecue action going on somewhere near by to St. Louis. But having read all the free papers over morning bagels, I couldn’t see any reference to ribs anywhere. Although I did spot there is a horseradish festival in 2 weekends time.

I struck lucky when I went to get some groceries from the fantastic Straubs – I was told to head down to the Soldiers Memorial Park for Rib America.

George & Erica agreed to take me there, which was extremely charitable of them considering they spent the last 15 years in Texas, and we had a very agreeable afternoon sampling the available wares. Each barbecue team puts up a dazzling array of garish signs asserting their teams superiority and dissing the other teams’ efforts. Each of them have a clutch of trophies and a long list of distinguished achievements.

We started off by being patriotic and plumping for a full rack of ribs from the local Chicago team. These were toothsome and moist and quite subtly flavoured. The cloying barbecue sauce is optional. 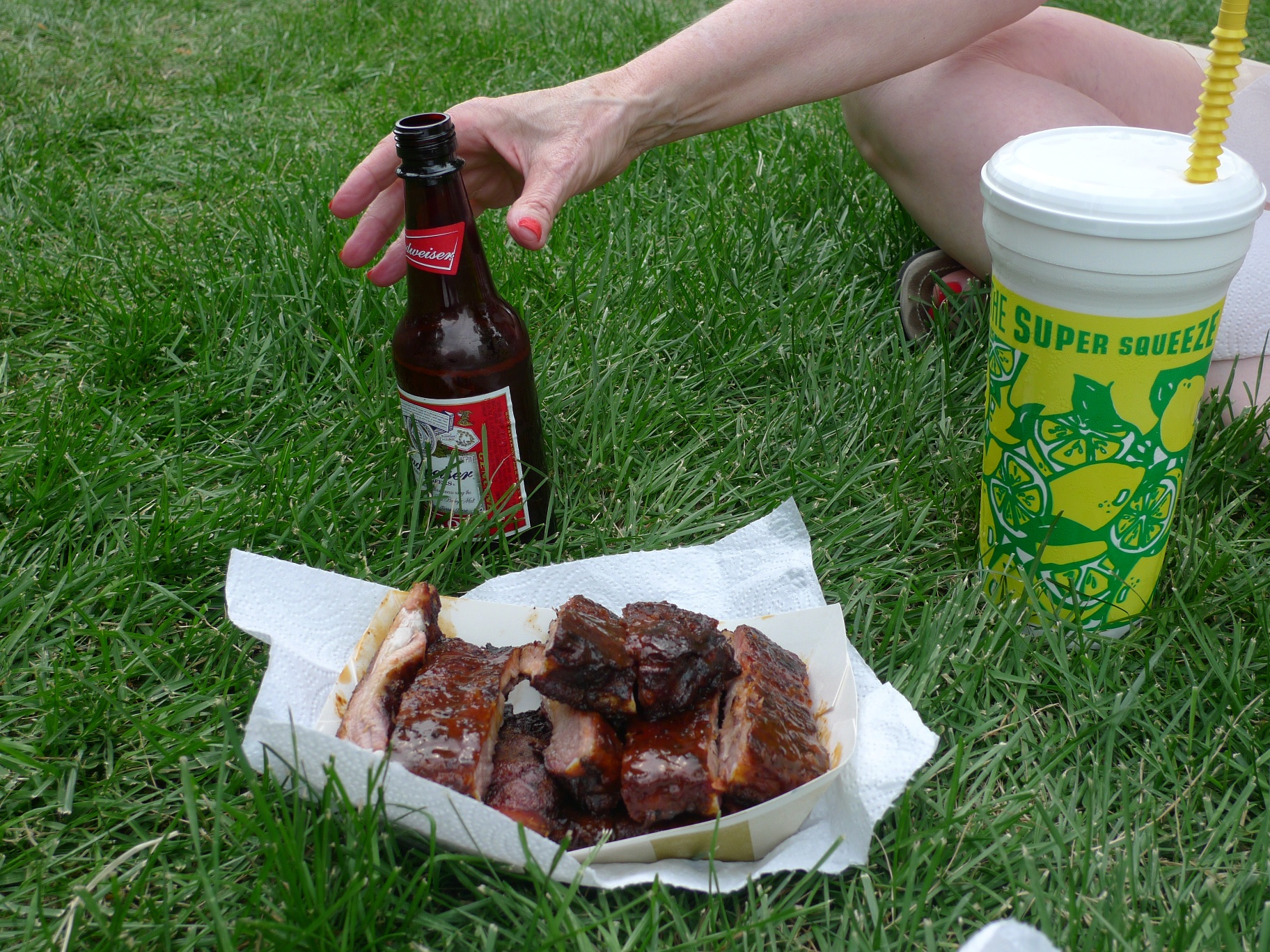 Technical barbecue note: if you want to enter the rib competition at American Royale it is a requirement that the meat only comes off the bone when you have stuck your teeth into it. If it’s hanging off already then it is deemed overcooked and disqualified!

The ribs was washed down with a Bud or two – these come from St. Louis and thus taste better here than in the UK.

Other than ribs, the other main meaty ingredients that make up the barbecue triumvirate are pulled pork butt and beef brisket. So when I saw that the Howling Coyote was available offering all three, plus sides of “Wonder Bread” – like a thick Sunblest, coleslaw and spicy beans, I knew this was my destiny.  George found me a corn on the cob too which they sprinkle with a spice mix. Yum.

Erica got a delicious funnel cake, which is a bit like a doughnut batter squeezed through a nozzle into the fryer. I didn’t have room for much of that, or for any deep-fried Oreos and deep-fried Twinkies (a kind of cake). 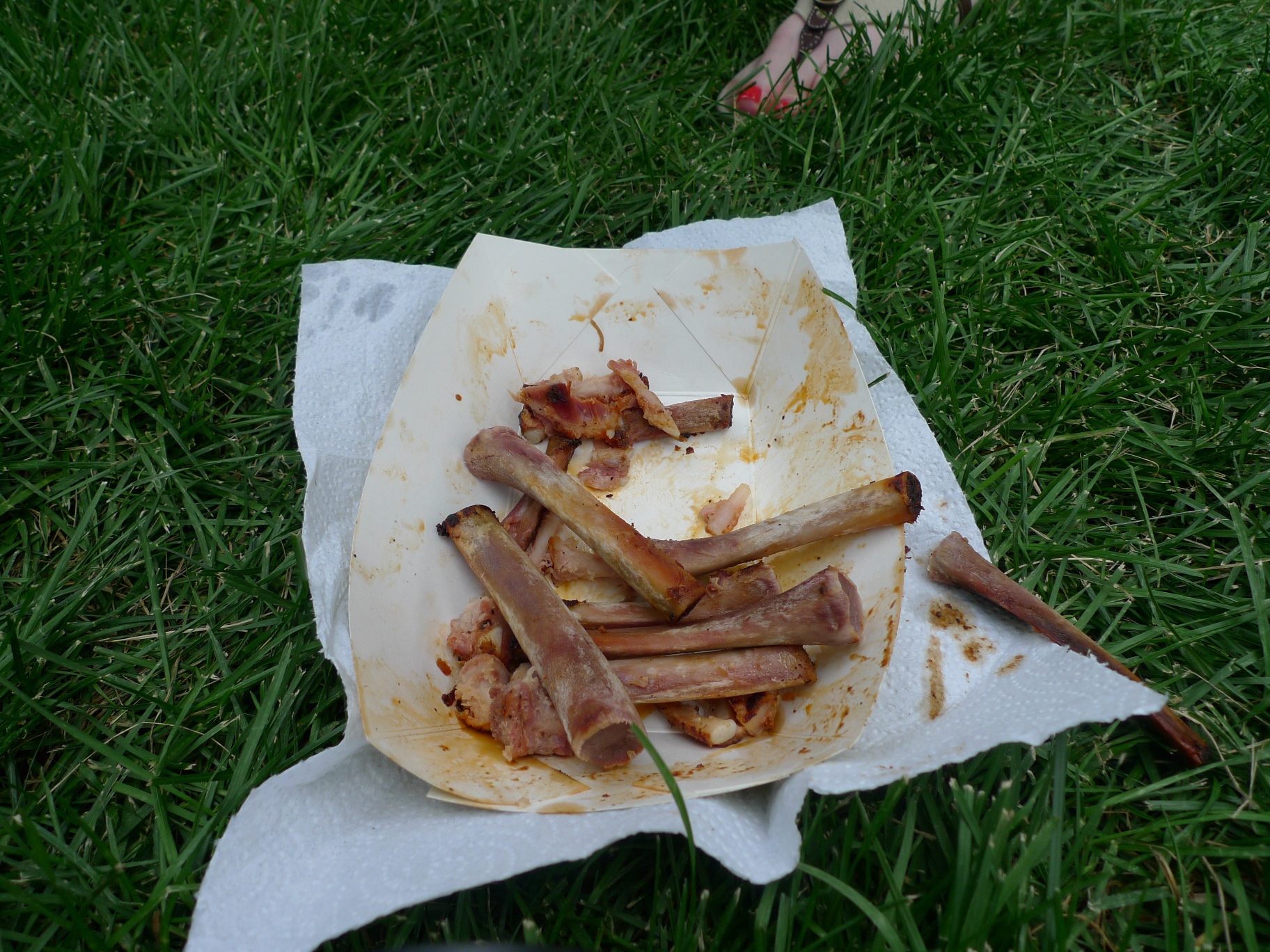 After all that, I felt happy and contented, a little bit sick and then really pretty tired as my portal circulation dilated furiously. I somehow managed to avert total gastric shut-down by getting a coffee, but the rest of the day was a write-off.

And, if you were wondering why I haven’t done any work yet, well that starts tomorrow! 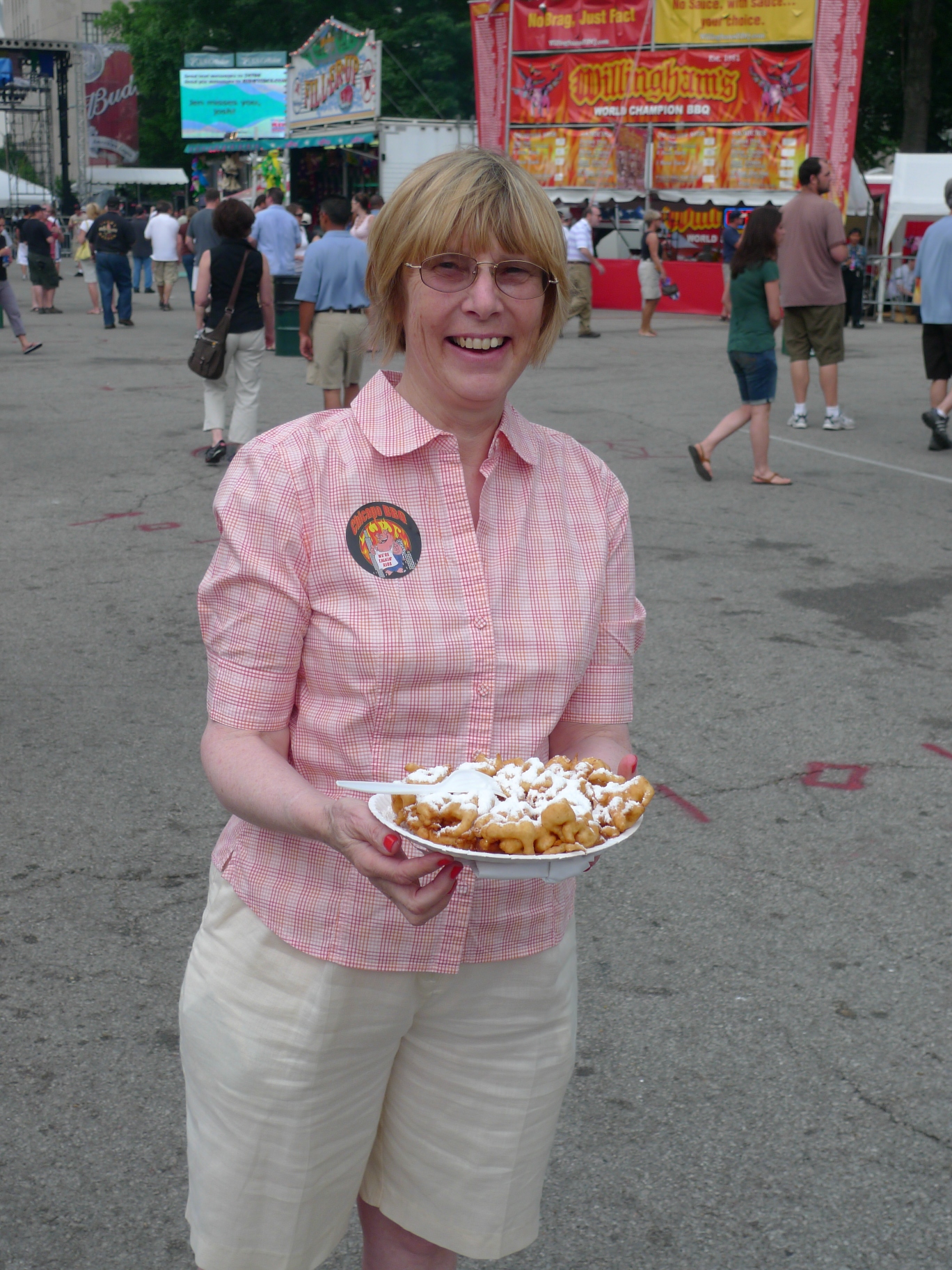 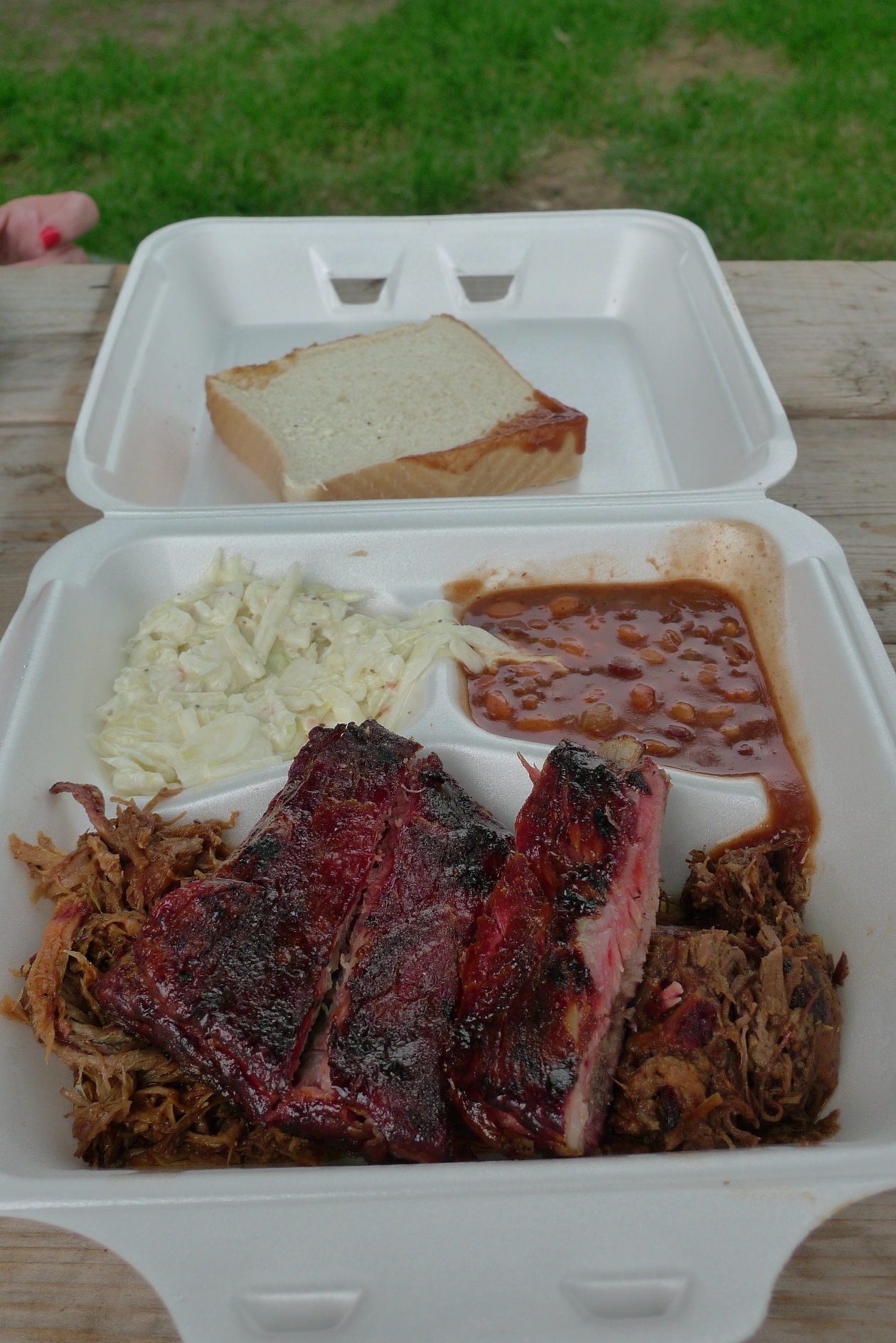 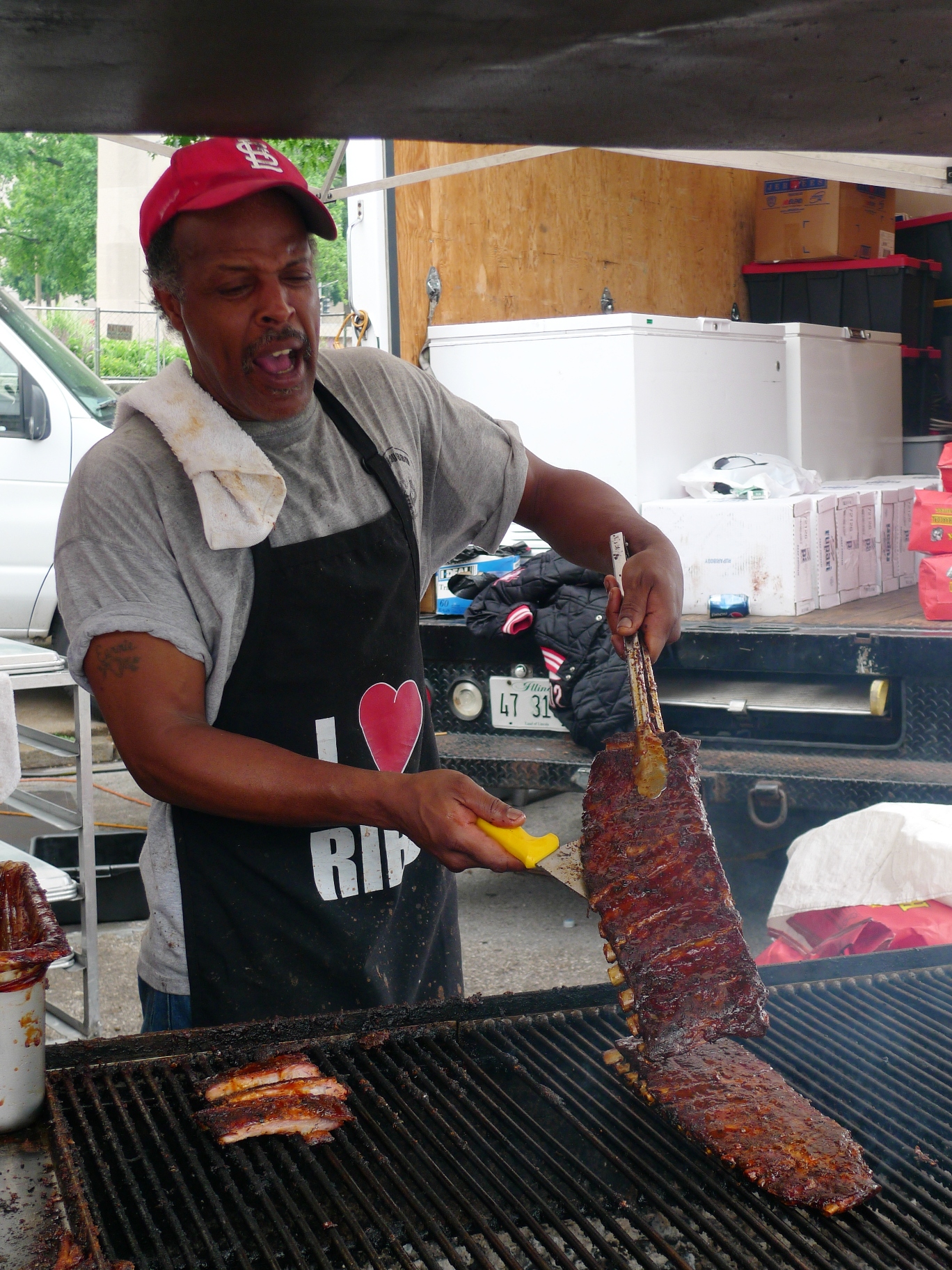 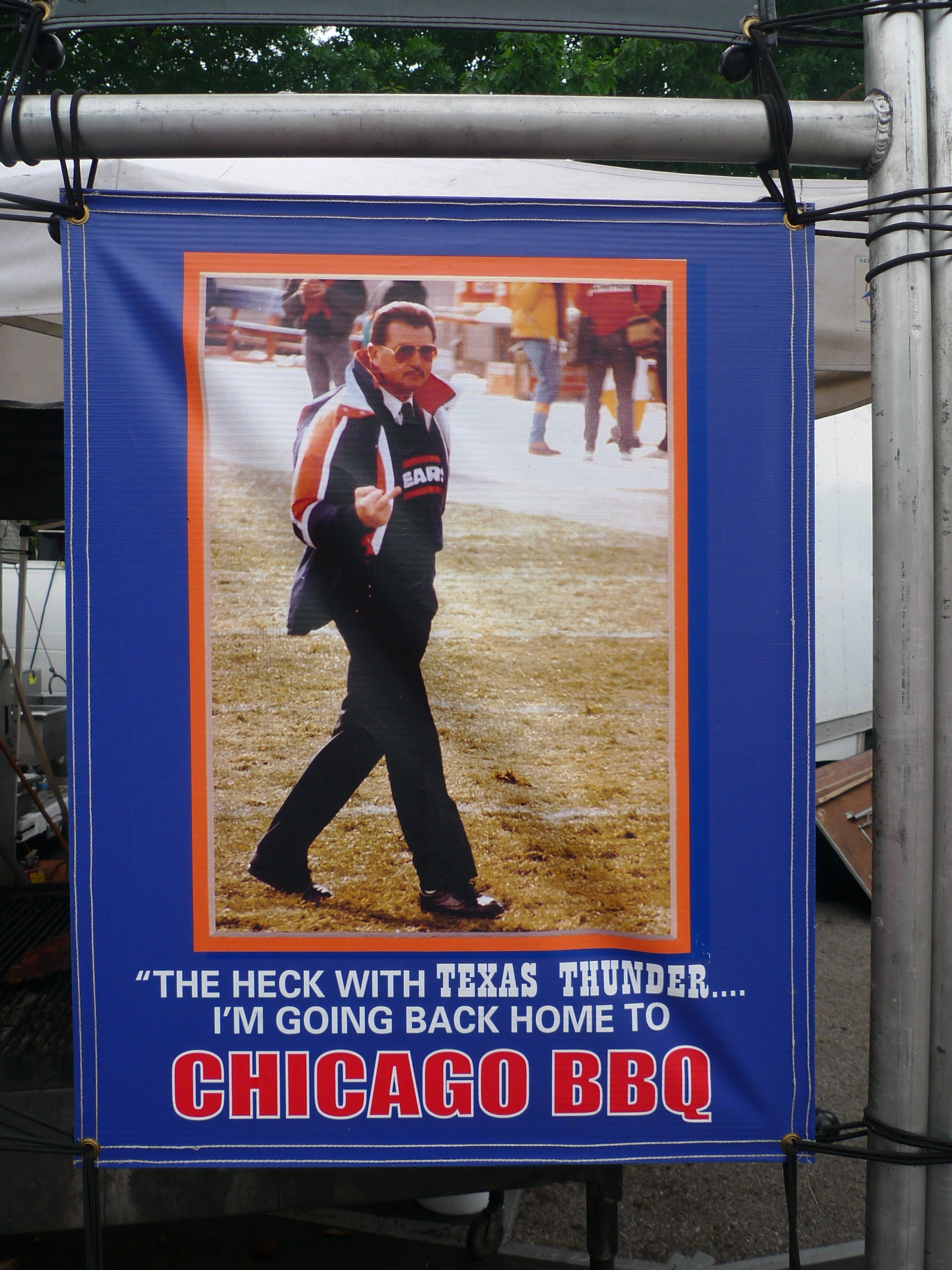 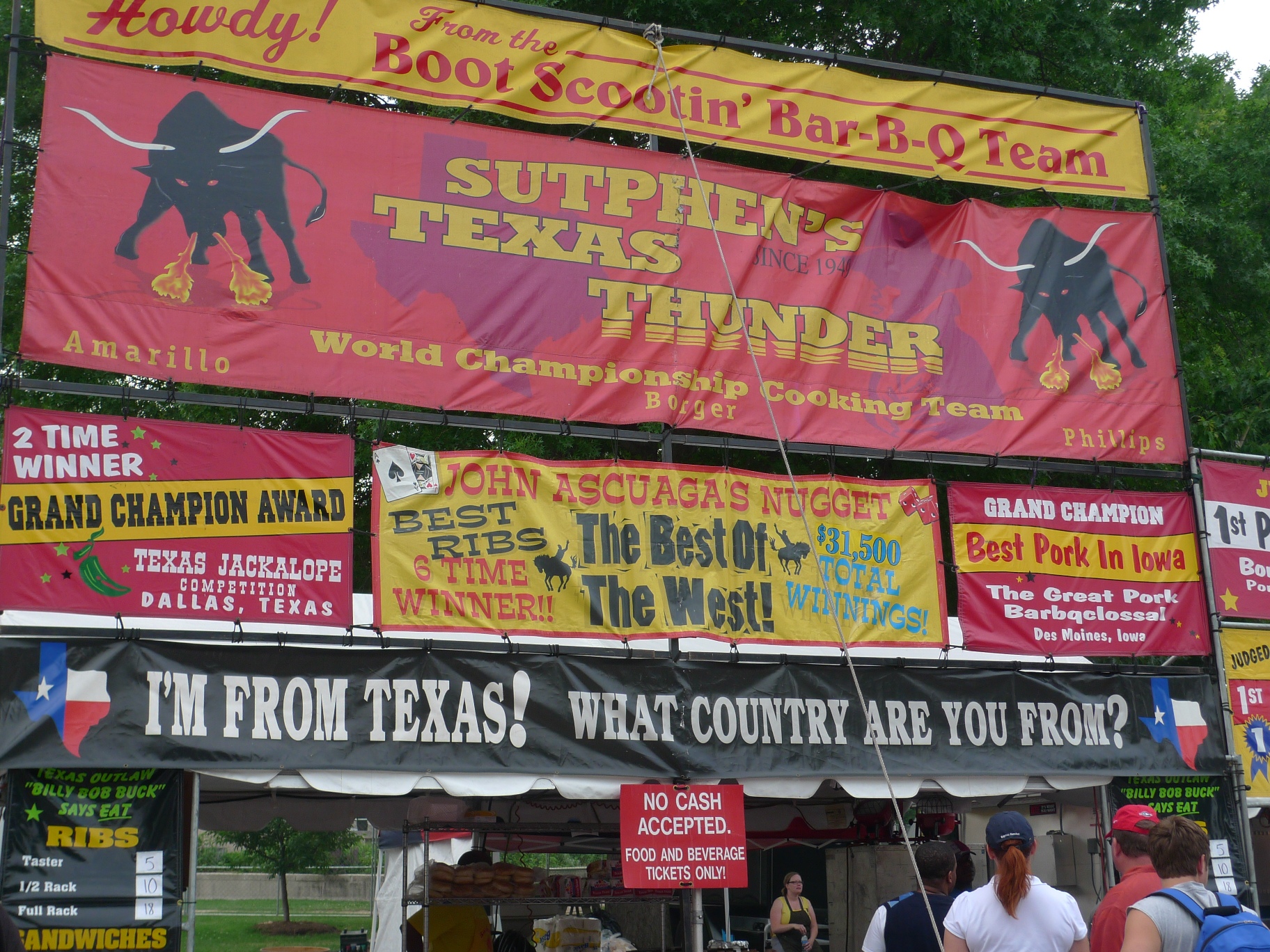 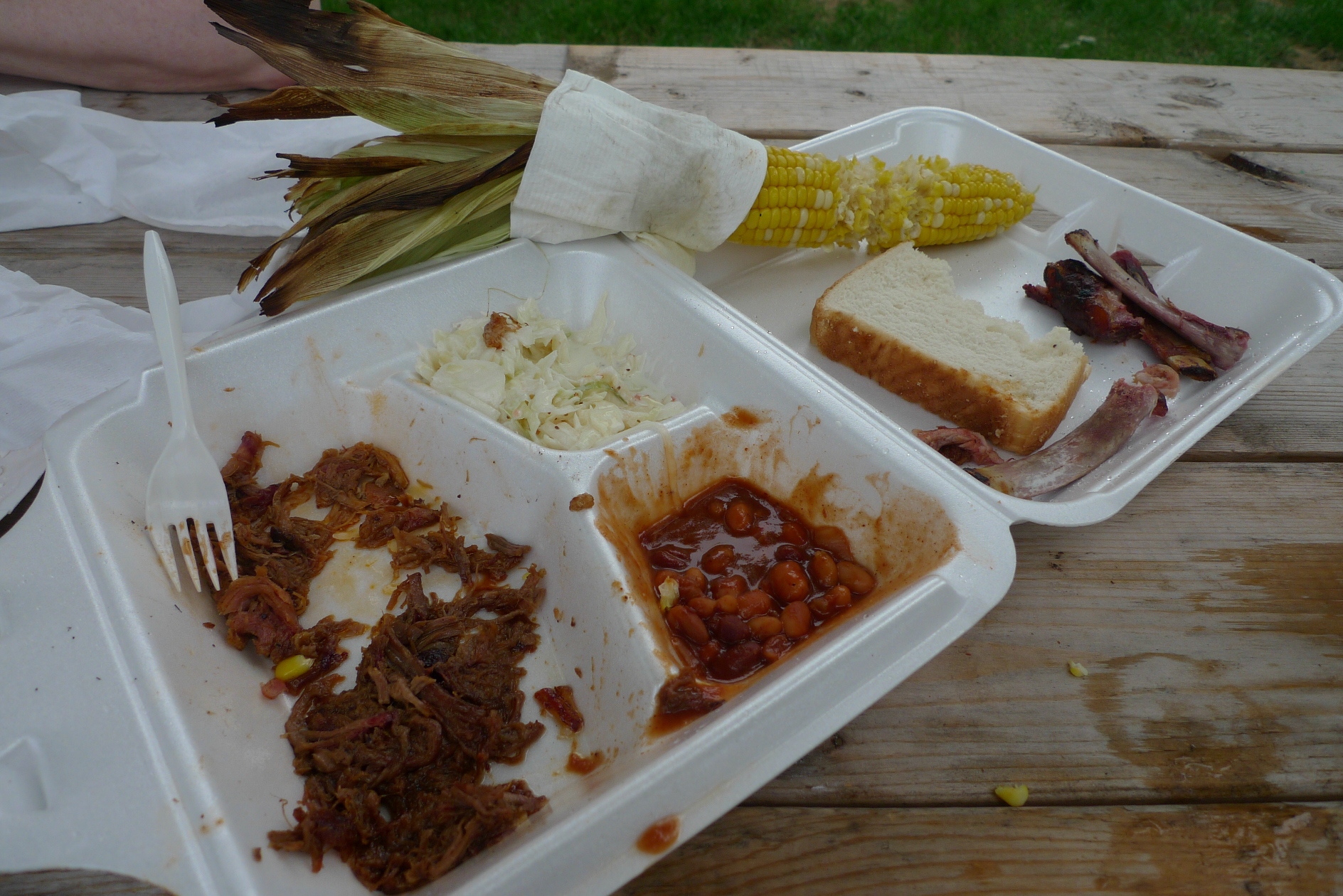 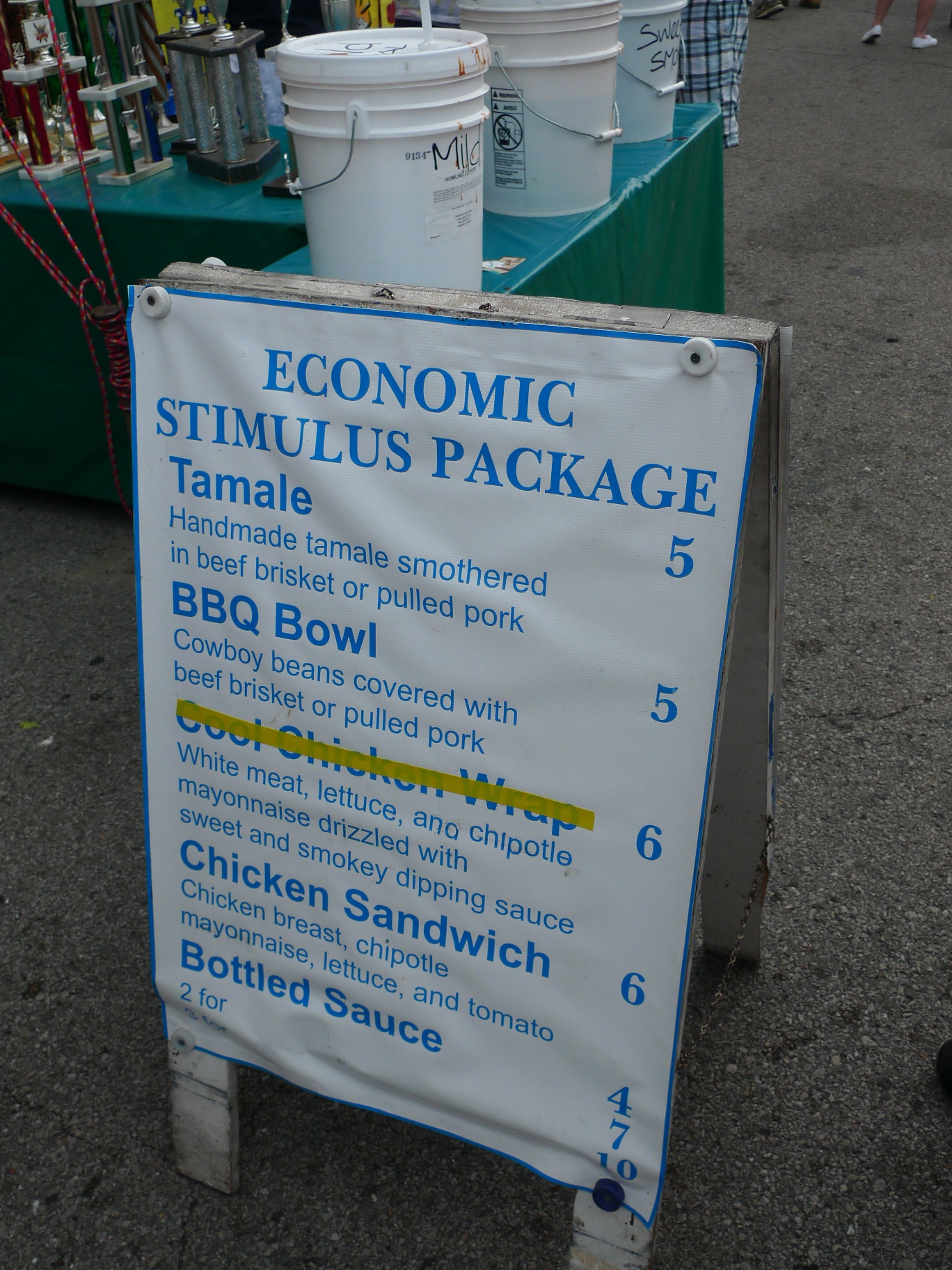 One thought on “Rib America”